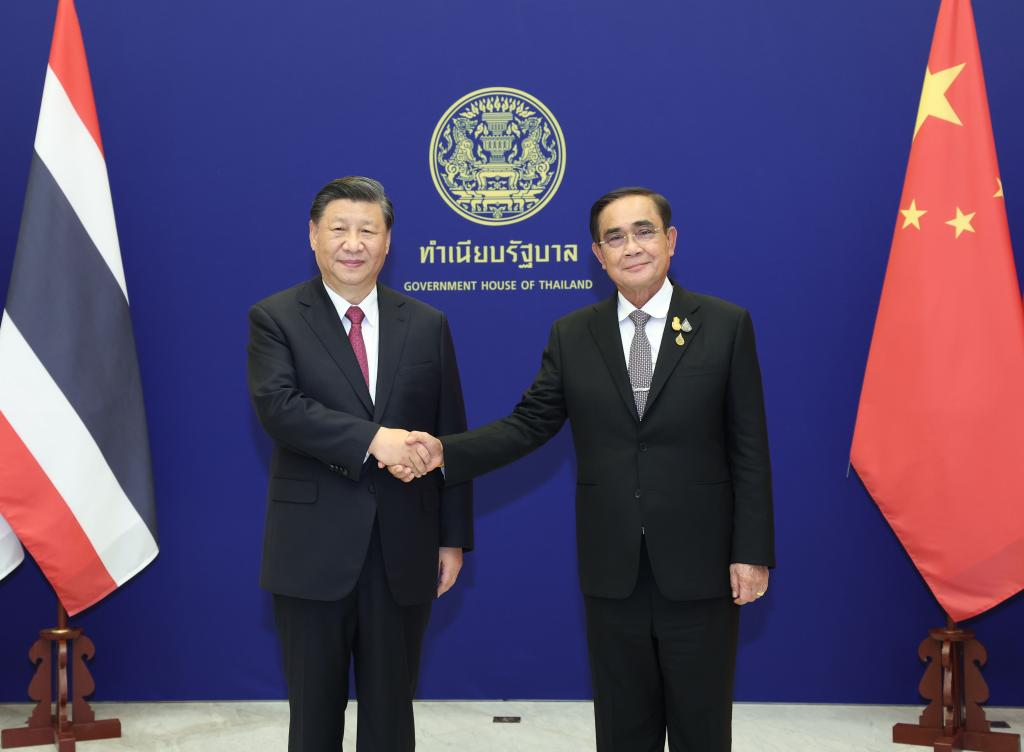 Prayuth warmly greeted Xi on his arrival at the Government House here. Thailand's senior officials of the Office of the Prime Minister, Supreme Commander and the Commanders-in-Chief of the Royal Thai Army, Navy and Air Force, among others, lined up to welcome Xi. Honor guards formed straight lines and saluted with eyes.

During their talks, Xi congratulated Thailand on successfully hosting the Asia-Pacific Economic Cooperation (APEC) Economic Leaders' Meeting. He stressed that China and Thailand enjoy a millennia-old friendship and the people of the two countries feel like brothers and sisters to each other.

Noting that China greatly values its relations with Thailand, Xi said that, at a new historical starting point, China will work with Thailand to carry forward the special bond that "China and Thailand are as close as one family," build a China-Thailand community with a shared future for enhanced stability, prosperity and sustainability, add new dimensions to the family-like relations, open up a new era of China-Thailand relations, and deliver more benefits to the two peoples.

While stressing the importance for the two sides to visit each other as often as relatives do and continue to firmly support each other on issues concerning each other's core interests and major concerns, Xi said the two sides should faithfully implement the Joint Action Plan on China-Thailand Strategic Cooperation for the next five years and work together for more fruitful cooperation in various fields.

He added that the two sides need to strengthen cooperation in traditional fields such as investment, trade, tourism, infrastructure and industrial parks, and at the same time cultivate new growth areas and drive progress in new fields of cooperation such as digital economy, new energy vehicles and technological innovation.

He added China is ready to work together with Thailand and other parties to the Regional Comprehensive Economic Partnership (RCEP) for its high-quality implementation, so that the world's largest free trade area arrangement will unleash even more benefits.

The two sides need to strengthen youth exchanges, bring their people's hearts even closer, further boost their affinity and enrich the people-to-people and cultural aspect of the China-Thailand community with a shared future, he said.

China, Xi noted, is ready to strengthen coordination with Thailand in international affairs and work actively with Thailand for the lasting peace and long-term development of the world.

China is ready to strengthen solidarity and cooperation with Thailand and other Association of Southeast Asian Nations (ASEAN) countries, focus on the building of a peaceful, safe and secure, prosperous, beautiful, and amicable home, and continuously unleash fresh momentum of China-ASEAN comprehensive strategic partnership, he added.

Noting that Thailand will soon assume the Lancang-Mekong Cooperation's co-chairmanship, Xi said China will work with the Mekong countries to jointly promote the high-quality development of sub-regional cooperation.

Prayut expressed warm congratulations on the successful 20th National Congress of the Communist Party of China (CPC) and Xi's re-election as general secretary of the CPC Central Committee.

He expressed confidence that under Xi's leadership, China will make remarkable achievements on the new journey towards building a modern socialist country in all respects, achieving the Second Centenary Goal and advancing the rejuvenation of the Chinese nation on all fronts.

Prayut said Xi's visit to Thailand and attendance at the APEC Economic Leaders' Meeting is his first trip to Thailand as Chinese president, and thus carries extraordinary significance.

This year marks the 10th anniversary of the comprehensive strategic cooperative partnership between Thailand and China, he said, adding that Thailand is ready to take this opportunity to work towards a Thailand-China Community with a shared future for enhanced stability, prosperity and sustainability on the foundation that "Thailand and China are as close as one family."

Thailand is ready to strengthen high-level interactions with China, continue to trust and respect each other, actively implement the Joint Action Plan on Thailand-China Strategic Cooperation and the Cooperation Plan on Jointly Promoting the Silk Road Economic Belt and the 21st Century Maritime Silk Road, accelerate the construction of the Thailand-China railway and its connection with the China-Laos railway, realize the China-Laos-Thailand Connectivity Development Corridor Outlook, enhance cooperation in such fields as trade, investment, poverty alleviation, infrastructure connectivity, cyber security, and combating transnational crimes, he said.

China has played a lead role in post-COVID economic recovery in the region, which fully demonstrates its sense of responsibility as a major country, he said, adding that China has contributed to stability, security and prosperity in the Asia-Pacific as well as regional countries' joint endeavor to foster an Asia-Pacific community with a shared future.

Thailand stands ready to work with China to implement the RCEP, Prayut said, adding that it supports the Global Development Initiative and the Global Security Initiative put forward by Xi and supports China in playing a greater role in regional and international affairs.

Thailand hopes to pool efforts together to build a peaceful, safe and secure, prosperous, beautiful and amicable home for China and ASEAN, he said.

After the talks, Xi and Madame Peng Liyuan attended a banquet hosted by Prayut and Madame Naraporn Chan-o-cha.

Ding Xuexiang, Wang Yi and He Lifeng, among others, were present at those events. 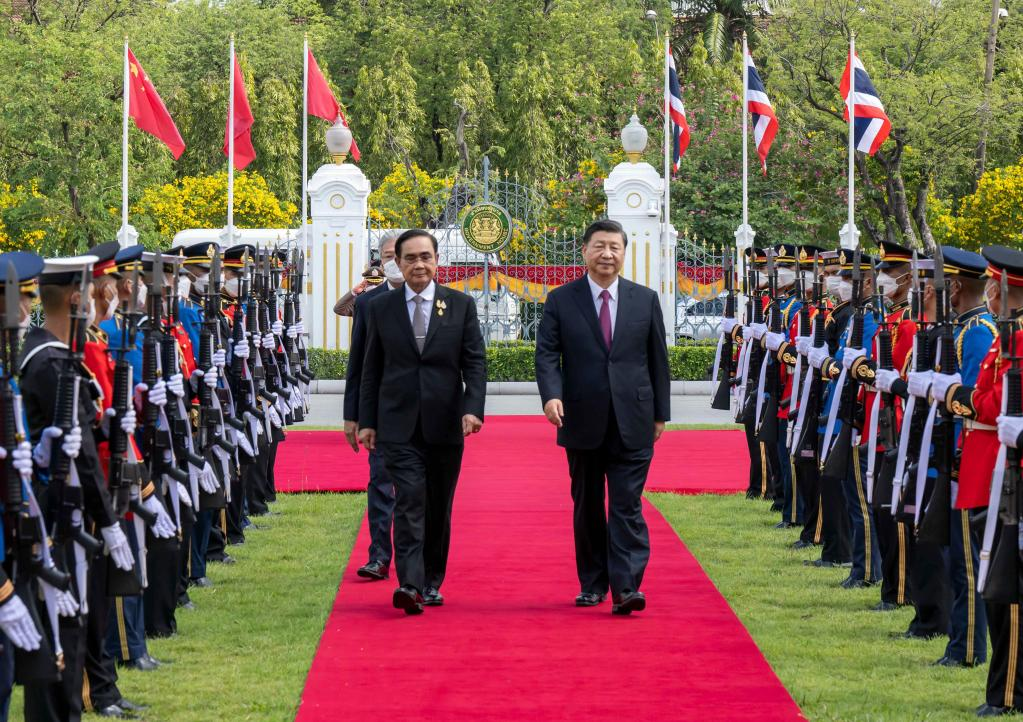 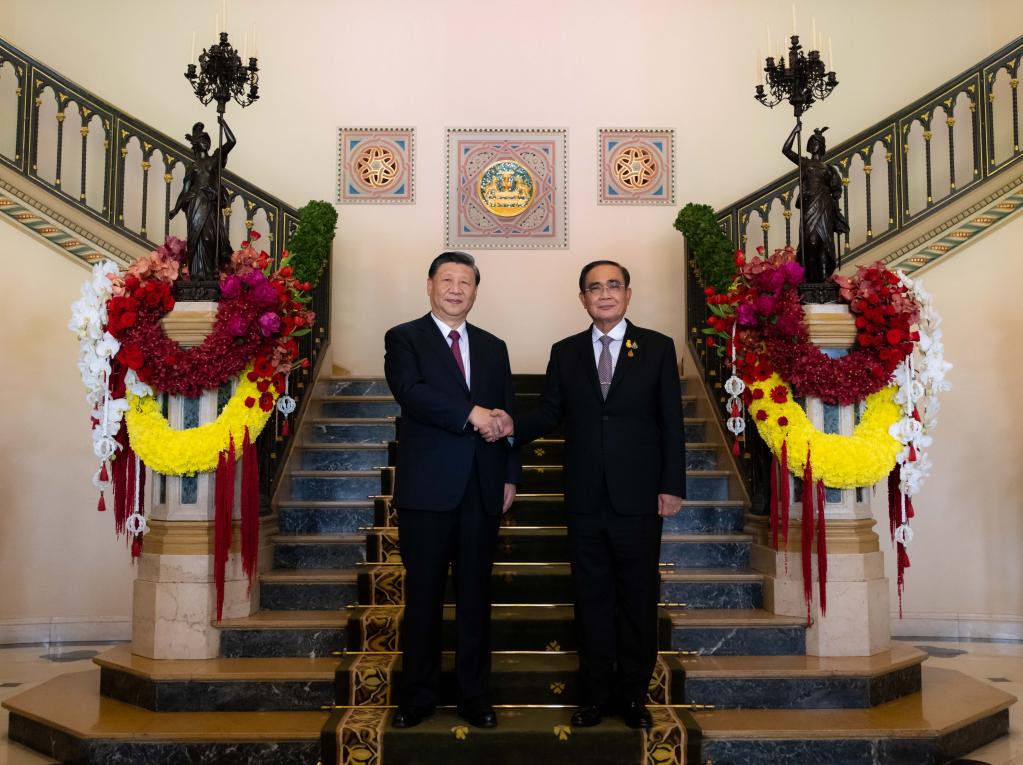 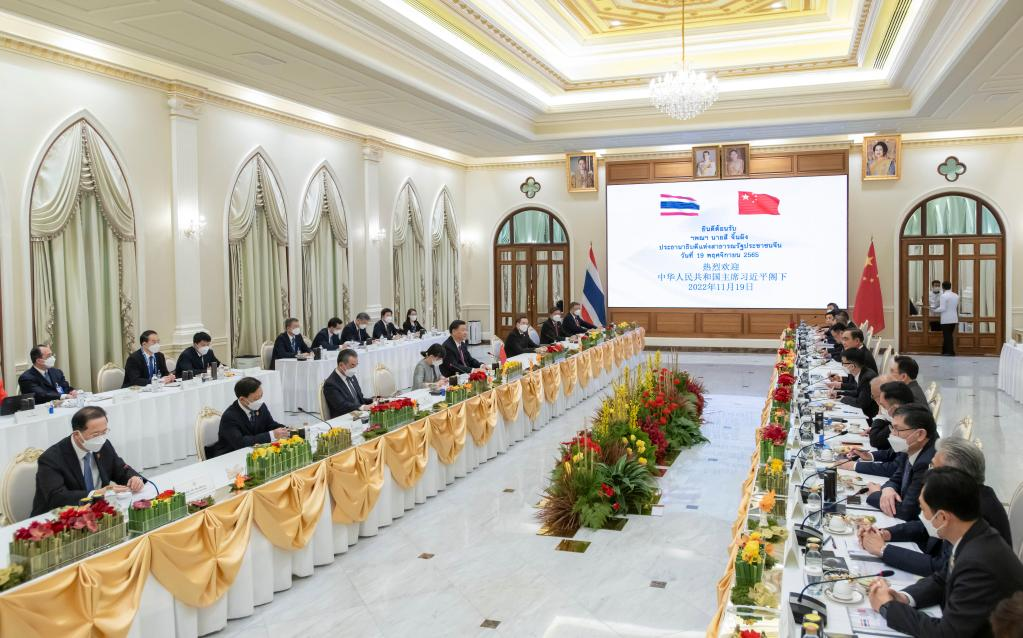