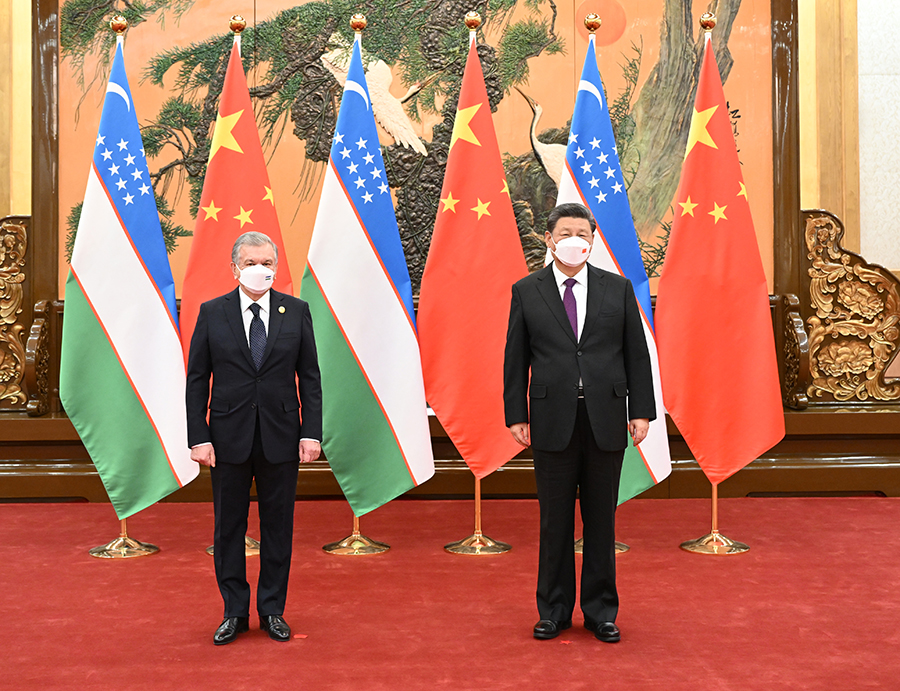 Chinese President Xi Jinping meets with Uzbek President Shavkat Mirziyoyev, who attended the opening ceremony of the Beijing 2022 Olympic Winter Games, at the Great Hall of the People in Beijing, capital of China, Feb. 5, 2022. [Photo by Li Xiang/Xinhua]

BEIJING, Sept. 13 (Xinhua) -- A signed article by Chinese President Xi Jinping titled "Working Together for a Brighter Future of China-Uzbekistan Relations" was published Tuesday on Uzbek media ahead of his state visit to the Central Asian country.

An English version of the article, carried by leading Uzbek newspaper Narodnoe Slovo and Uzbekistan National News Agency (UzA), is as follows:

Working Together for a Brighter Future of China-Uzbekistan Relations

"The land is fertile and crops thriving. Trees flourish, and flowers and fruits abound. A place home to steeds." This is how Huen Tsang, an eminent Chinese monk in the Tang Dynasty over 1,300 years ago, depicted the richly-endowed Samarkand. In this lovely mid-autumn month, a season of harvest, I will once again visit the beautiful city of Samarkand at the invitation of President Shavkat Mirziyoyev, to discuss with him plans for closer cooperation between China and Uzbekistan, and to attend the Shanghai Cooperation Organization (SCO) Summit.

Both China and Uzbekistan are ancient civilizations, and the great Silk Road has borne witness to the friendly exchanges of the two peoples over the past 2,000 years and more. Several historical figures from China traveled west to visit Uzbekistan, including Zhang Qian of the Western Han Dynasty (206 BC-24 AD), Huen Tsang of the Tang Dynasty (618-907) and Chen Cheng of the Ming Dynasty (1368-1644), leaving their footprints in famous cities like Tashkent, Samarkand and Navoi. During the Yuan Dynasty (1271-1368), Sayyid Ajall Shams al-Din, a statesman whose ancestral home was in Bukhara, served as the governor of Yunnan province in China. In the mid-14th century, Wu Ru, an authority on astronomy and calendar and a native of Samarkand, participated in the construction of an observatory in Nanjing. These people were trailblazers and pioneers in the China-Uzbekistan friendship, and stories about them are still widely told in both countries.

Uzbekistan is a major country at the geopolitical center of Central Asia. Over the last 31 years since gaining independence, Uzbekistan has scored remarkable achievements in national development and rejuvenation. In recent years in particular, under the leadership of President Mirziyoyev, the people of Uzbekistan have embarked on a new journey toward a "New Uzbekistan". Reform and development in various areas have entered the fast lane. The country has taken on a new look, its people enjoy a better life, and its international standing has risen significantly. As a friendly neighbor and comprehensive strategic partner, China feels truly happy for Uzbekistan.

This year marks the 30th anniversary of China-Uzbekistan diplomatic ties. Over the past three decades, the giant tree of our relationship has taken deeper roots and grown more exuberant. The two countries have respected each other, fostered good-neighborliness, strengthened solidarity and pursued mutual benefit. Cooperation across the board has yielded concrete results.

-- We are good friends sharing close affinity. Since 2016, President Mirziyoyev and I have stayed in close contact and forged a good working relationship and deep personal friendship through meetings, phone calls and correspondence. Under a comprehensive strategic partnership, the two countries have rendered mutual support on issues concerning each other's core interests, supported each other's implementation of development strategies, drawn upon each other's experience of reform and opening-up, and injected positive energy into regional development.

-- We are good partners pursuing common development. China is the biggest trading partner and a major investor for Uzbekistan. Two-way trade exceeded US$8 billion in 2021, approached US$5 billion in the first half of this year, and is on course to reach the US$10-billion goal set for 2022. Cooperation under the Belt and Road Initiative has been fruitful, and major projects are making steady progress. All four lines of the China-Central Asia natural gas pipeline run through Uzbekistan. The tunnel on the Angren-Pap railway line, the longest tunnel in Central Asia, has been successfully completed. More transport potential is being unleashed from the China-Kyrgyzstan-Uzbekistan highway and the China-Kazakhstan-Uzbekistan railway. And preparations for the China-Kyrgyzstan-Uzbekistan railway project are well under way. Uzbekistan is thus transforming from a land-locked to a land-linked country. The two sides have also carried out robust cooperation in new energy, agriculture, finance and modern telecommunications, delivering greater benefits to the two peoples.

-- We are a good example of dialogue between civilizations. The two sides have held a wide range of exchanges including art festivals, culture promotion events, exhibitions and seminars. Cooperation is flourishing with regard to sending students, translating publications, making films, translating TV series, and conducting sub-national interactions and personnel training, which has effectively brought the two peoples still closer. In recent years, China has trained for Uzbekistan over 6,500 professionals of various fields. They are taking an active part in Uzbekistan's reform and development endeavors. Confucius Institutes have been set up in Tashkent and Samarkand where a great number of Uzbeks learned the Chinese language and they have become envoys of friendship between our two countries. Cooperation in tourism is taking off, bringing more Chinese to the beautiful land of Uzbekistan. The preservation and restoration of historical sites in Khiva, a project launched during my visit to Samarkand in 2013, has been successfully concluded, further augmenting the charm of this ancient city.

-- We are good brothers supporting each other in times of need. China and Uzbekistan, with their interests closely entwined, have stood together through thick and thin. We have maintained close coordination both bilaterally and in such regional and multilateral frameworks as the SCO. We have worked together to oppose external interference, combat the three forces of terrorism, separatism and extremism, and tackle transnational organized crimes and drug trafficking. By strengthening intelligence sharing and expanding personnel training, we have jointly forged a strong shield of security. In face of the COVID-19 pandemic, our two countries have supported each other and conducted active cooperation. Chinese vaccines, which can now be jointly produced with Uzbekistan, have played a major role in Uzbekistan's fight against the virus, and a Chinese COVID drug has been approved for clinical use in Uzbekistan, providing effective protection for the life of people in both countries.

Over 2,000 years of friendly exchanges and three decades of mutually beneficial cooperation show that enhancing China-Uzbekistan cooperation on all fronts conforms to the trend of history and meets the fundamental interests of both peoples. Standing at the intersection of past and future, we are full of confidence and expectation for a more promising prospect of China-Uzbekistan relations.

First, we need to enhance mutual support and strengthen the bond of mutual trust. We need to set out the blueprint for China-Uzbekistan relations in the new era from a strategic and long-term perspective. We need to intensify high-level exchanges, increase mutual political trust, deepen the sharing of governance experience, and continue to render mutual support on issues concerning each other's core interests. China firmly supports Uzbekistan in pursuing a development path suited to its own national conditions and opposes interference in Uzbekistan's internal affairs by any force.

China hopes to work with Uzbekistan to actively implement the Global Development Initiative, and take concerted actions to safeguard the interests of developing countries and foster a balanced, coordinated and inclusive development landscape that embraces win-win cooperation, works for all and delivers common prosperity.

Third, we need to strengthen security cooperation to defuse risks and challenges. Our two sides need to deepen cooperation in the security field and unequivocally reject attempts by any force to undermine regional security, to foster a secure external environment for the development of both countries. Afghanistan is a mutual neighbor of China and Uzbekistan. A peaceful, stable, growing and prosperous Afghanistan is in our shared interests. China appreciates and supports the unique role of Uzbekistan in resolving the issue of Afghanistan. We stand ready to work with Uzbekistan to put the Global Security Initiative into action, fend off new threats and challenges, and uphold peace, stability and international fairness and justice.

Fourth, we need to promote cultural exchanges to enhance people-to-people connectivity. Between relatives and friends alike, with closer interaction the affinity grows. The China-Uzbekistan friendship enjoys a time-honored history and our cooperation on people-to-people exchanges has a solid foundation and bright prospects. We need to expand cooperation in the areas of media, education, health, culture, tourism, press, archeology and at the sub-national level, open culture centers in each other's countries at an earlier time and set up a Luban Workshop in Uzbekistan, to foster a multi-faceted framework of people-to-people exchanges. This will help sustain the growth of China-Uzbekistan relations and build a lasting friendship between our peoples.

During my visit to Uzbekistan this time, I will attend the SCO Samarkand Summit. This year marks the 20th anniversary of the signing of the Charter of the Shanghai Cooperation Organization and the 15th anniversary of the signing of the Treaty on Long-Term Good-Neighborliness, Friendship and Cooperation of the Member States of the Shanghai Cooperation Organization. Guided by the purposes and principles enshrined in these two documents, the SCO has acted on the Shanghai Spirit, stayed true to its founding mission, and promoted the joint efforts among its member states for stability and development. The SCO has set a fine example of a new type of international relations featuring mutual respect, fairness, justice and win-win cooperation, and proved itself an important and constructive force in the Eurasian region and in international affairs.

Since assuming SCO presidency, despite the impacts from COVID-19, Uzbekistan has strengthened communication and coordination with other member states, made solid efforts on various fronts, and preserved the SCO's momentum of sound and steady development. China applauds Uzbekistan for its efforts. I am confident that with the joint efforts of all sides, the Samarkand Summit will produce fruitful outcomes and make greater contribution to building an even closer SCO community with a shared future and to peace, stability, development and prosperity of our region.

As the saying goes, when your heart knows its direction, the distance to destination will never be long. Bearing in mind the original aspiration upon the establishment of our diplomatic relations, China will work with Uzbekistan to seize the historical opportunities, forge ahead side by side on the path of national development and rejuvenation, and make joint efforts toward the goal of building a China-Uzbekistan community with a shared future.