Source: cpaffc.org.cn | 2014-05-15
Share：
Speech by Chinese President Xi Jinping at China International Friendship Conference in Commemoration of the 60th Anniversary of the CPAFFC 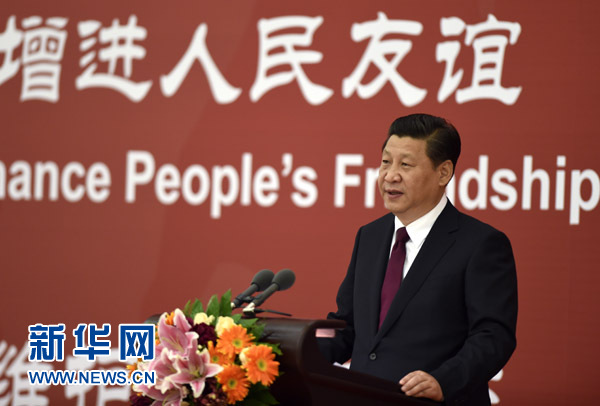 Chinese President Xi Jinping addresses the China International Friendship Conference in commemoration of the 60th anniversary of the Chinese People's Association for Friendship with Foreign Countries (CPAFFC), May 15, 2014. [Photo by Li Xueren/Xinhua]

Good morning! It gives me great pleasure to be here and celebrate with you the 60th anniversary of the Chinese People's Association for Friendship with Foreign Countries (CPAFFC).

First of all, on behalf of the Chinese government and people and also in my own name, I would like to extend warm congratulations on the opening of the conference and sincere welcome to all friends present.

Confucius, a Chinese philosopher, said over 2,000 years ago, "It is such a delight to have friends coming from afar." We have invited friends from home and abroad to gather here so that we can thank you for your unremitting efforts in enhancing the friendship between China and other countries, review our extraordinary journey in pursuit of our common aspirations, and celebrate our long-standing friendship and cooperation.

The Chinese nation always believes in repaying the kindness of a drop of water with a wellspring of gratitude. The Chinese people will never forget our friends. Here, I would like to take this opportunity to pay tribute to all of our peace-loving international friends who have cherished our friendship and sympathized with and supported China's revolution, reform and development over the years.

As trends toward a multi-polar world, economic globalization, and greater application of information technology gather momentum, countries are inter-connected and inter-dependent in terms of their national interests, fortune and security. They are in a closely-knit community of shared destiny. Facing the complex and ever-changing world situation and acute global issues, people of all countries need to strengthen friendly exchanges and work together to overcome challenges.

Today, China is in the midst of growth, reform and progress. We have set two "centenary goals", i.e. to complete the building of a moderately prosperous society and double China's 2010 GDP and per capita income of rural and urban residents by 2020 and to turn China into a modern socialist country that is prosperous, strong, democratic, culturally advanced and harmonious and realize the Chinese dream of the great renewal of the Chinese nation by the middle of this century. The Chinese dream not only represents the Chinese people's pursuit of happiness, but also echoes the aspirations of the people all over the world. In pursuing the Chinese dream, China will go hand in hand with all other countries to help them realize their dreams.

The Chinese people's endeavor in realizing the Chinese dream will bring a huge opportunity to the world. In November 2013, the Central Committee of the Communist Party of China held its third plenary session, sounding the clarion call for the deepening of reform in a comprehensive way. China is working to translate the reform blueprint into reality. This new round of reform will be a strong driver for China's development. It is certainly good news for the world economy.

As a Chinese saying goes, "The ocean is vast for it admits hundreds of rivers." China will open itself wider to the world, advance mutually beneficial cooperation with other countries, and promote the development of the economic belt along the Silk Road and the Maritime Silk Road of the 21st century so that countries can create and share development opportunities together. With greater openness, inclusiveness and broad vision, China will vigorously engage in cultural exchanges with other countries and make due contribution to the advancement of world civilization through mutual learning.

In recent years, with the rapid development of China, some people have started to worry that a powerful China will seek hegemony and some people have put forward the "China threat theory". These views are mostly due to misperceptions and in some cases, they are the result of a strong bias against China.

The Chinese nation always loves peace. As an important part of Chinese culture, the concept of harmony has a long history and strong appeal. We believe in unity between man and nature, peace among countries, the approach of "agree to disagree" and the good nature of people. In China's 5,000-year history, the Chinese nation has been pursuing and maintaining the philosophy of peace, friendship and harmony. Peace is most precious; treat others with kindness; don't do to others what you don't want others to do to you. These ideas have passed from generation to generation and taken root in the mentality of the Chinese and is reflected in their behaviour.

Our forefathers knew that a warlike state would eventually perish however big it might be. Since ancient times, the Chinese nation has been keen on foreign trade and communication, rather than invasion and expansion. The Chinese have focused on protecting their country under patriotism, instead of grabbing more land under colonialism. More than 2,100 years ago, the Chinese people launched the Silk Road , which facilitated equal-footed exchanges between eastern and western civilizations and brought about success stories of mutually beneficial cooperation, tremendously benefiting people of the various countries along the Silk Road. Over 600 years ago, a Chinese navigator named Zheng He led what was then the most powerful fleet in the world on seven expeditions to the Pacific Ocean and the western Indian Ocean. They visited over 30 countries and regions, without taking a single inch of land. They were there to sow the seed of peace and friendship, leaving behind many stories of friendship and cultural exchanges with the local people. The modern history of China before the founding of the PRC is a tragic chapter of humiliation, disaster and defeat. But it is also a great history of the Chinese nation's resistance against foreign aggression and its struggle for national independence. The Chinese people, who have been through such trials and tribulations, cherish peace and will, under no circumstances, impose its own woeful experiences upon other nations.

The Chinese people don't have the gene for invasion and hegemony in their blood. The Chinese reject the argument that a country is bound to seek hegemony once it becomes powerful. The Chinese want to live in harmony and share common development with the people of other countries so that together we can seek, safeguard and benefit from peace.

History has told us to stay on high alert against war, which, like a demon and nightmare, would bring disaster and pain to the people. History has also told us to preserve peace with great care, as peace, like air and sunshine, is hardly noticed when people are benefiting from it, but none of us can live without it. The world today still faces the danger of war. People in many countries and regions are trapped in wars, and the lives of countless women and children are threatened. All peace-loving people with a conscience should act to stop war and uphold peace.

China will continue to pursue peaceful development and encourage other countries to follow peaceful development. China will shoulder more international responsibilities, work with other countries to stand up for humanity and international justice, uphold justice in international and regional affairs, and take a more active part in seeking solutions to hotspot issues. China will develop itself through maintaining world peace and promote world peace through its own development. China will stay committed to equal consultation in handling problems and differences and demonstrate utmost sincerity and patience in seeking a negotiated settlement of differences.

2015 will mark the 70th anniversary of the victory of the World Anti-Fascist War. Over the years, thanks to the joint efforts of all peace-loving people around the world, the outcome of the victory of the Second World War and the post-war international order have been maintained, and peace and development have become the theme of our times. This has created an enabling environment for the development of all countries. The Chinese people will, together with the people of other countries, commemorate this great victory and cherish and safeguard the hard-won peace.

As the Chinese saying goes, "Affinity between the people holds the key to state-to-state relations while mutual understanding holds the key to people-to-people relations." On a recent visit to the UNESCO headquarters, I saw, on the stone wall at the entrance, a message in several languages. It reads, "Since wars begin in the minds of men, it is in the minds of men that the defenses of peace must be constructed." The message underscores the truth that the key to peace and common development is to make sure people of different countries fully understand the importance of peace and development to mankind. Therefore, we should strengthen inter-civilization exchanges and mutual learning. And people-to-people diplomacy represents the most profound force in promoting such exchanges and mutual learning.

Diversity and richness of civilizations is a result of exchanges and mutual learning. Such exchanges and mutual learning are a major driver behind the progress of human civilization and peace and development of the world. We need to encourage inter-civilization interactions that transcend national boundaries and temporal and spacial limits to promote mutual understanding, support and assistance among people of different countries, foster conviction in peace and common development, and forge a strong power that prevents and opposes war and promotes common development.

Over the years, the CPAFFC has followed China's independent foreign policy of peace and devoted itself to making friends with other countries and peoples. It has made a great deal of good efforts and played an irreplaceable role in deepening people-to-people friendship, enhancing state-to-state relations, and advancing international cooperation. In its 60 years of history, the CPAFFC has fully demonstrated the power of friendship between people of different countries in promoting world peace and development as well as the important place people-to-people diplomacy has in China's overall diplomatic agenda.

China has scored remarkable achievements in its development, but it remains the largest developing country with a lot of challenges and a long and arduous journey ahead. We need to draw upon the fruits of other civilizations created by people around the world.

I hope the CPAFFC will build on its past accomplishment to achieve greater success in promoting people-to-people diplomacy, city-to-city diplomacy and public diplomacy, and make still greater contribution to the friendly people-to-people exchanges between China and other countries. People-to-people diplomacy needs innovation. Efforts should be made to conduct multi-tiered friendly exchanges in various fields and through diverse channels so as to make as many friends as possible. Sincerity in such exchanges holds the key to bringing the Chinese people and people of other countries together and bringing about greater mutual friendship, affinity, empathy and support. It is especially important that we encourage exchanges among young people so that the friendship between our countries will have successors.

People-to-people diplomacy should leverage its advantages to open more channels for communication, set up more platforms for cooperation, and encourage more foreign institutions and talents to contribute to the modernization of China. More efforts need to be made on the sister city project to encourage exchanges at the local government level for the benefit of resources sharing, mutual complementarity and win-win cooperation. Attention should be given to public diplomacy to promote broad participation in NGO activities across the world, spread China's message, share China's story, and present to the world a true, multi-dimensional and full picture of China.

With hope, dream and hard work, nothing is impossible. The Chinese people have their dream, so do the people of other countries. This will bring unlimited vigor and a promising future to the world. Let us work together for our dreams and the noble cause of peace and development for all.