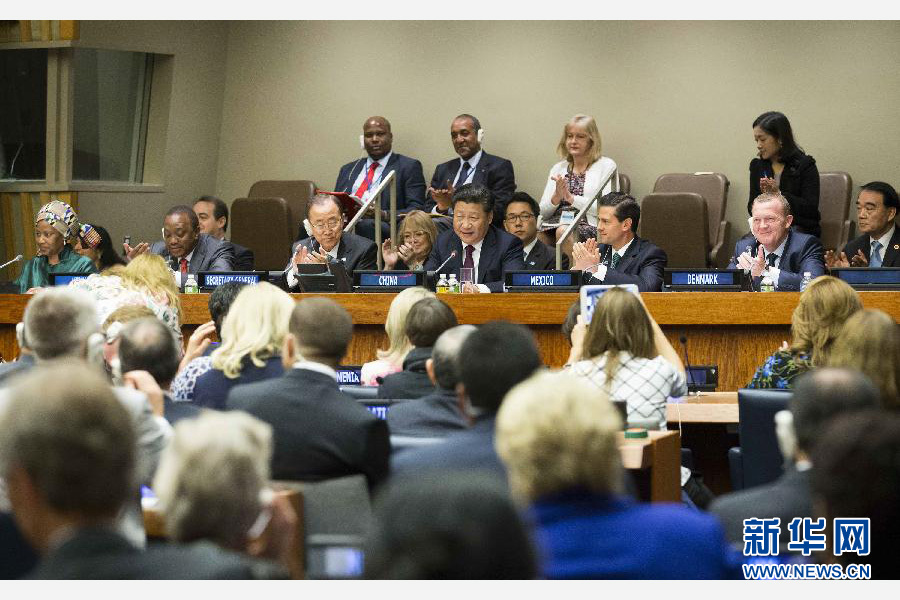 Chinese President Xi Jinping delivers a speech at the Global Leaders' Meeting on Gender Equality and Women's Empowerment at the United Nations headquarters in New York, the United States on Sept. 27, 2015. Following is the full text:

Xi Jinping, President of the People's Republic of China

On the occasion of the 70th anniversary of the founding of the United Nations and the 20th anniversary of the Fourth World Conference on Women in Beijing, it is of great significance for us to convene this Global Leaders' Meeting to reaffirm our commitment to gender equality and women's development and make plans for a better future.

Women are creators of material and spiritual wealth, and represent an important force driving social development and progress. Without women, there would be no continuity of the human race or human society.

The pursuit of gender equality is a great cause. A review of history shows that without women's liberation and progress, the liberation and progress of mankind would not be attainable. To achieve the lofty goal of gender equality, we have gone through an extraordinary uphill journey. From the publication of the Declaration of the Rights of Woman and the Female Citizen over 200 years ago to the observance of International Women's Day on March the Eighth, from the establishment of the UN Commission on the Status of Women to the adoption of the Convention on the Elimination of All Forms of Discrimination Against Women, every step taken to promote the cause of gender equality has been a giant step forward for the progress of human civilization.

Twenty years ago, the Fourth World Conference on Women in Beijing adopted the Beijing Declaration and the Platform for Action, laying down strategic goals and policy frameworks for promoting gender equality and ensuring women's rights. Today, the spirit championed by the Beijing Conference has catalyzed positive changes worldwide. The consensus among countries on pursuing gender equality is strengthening. A whole range of different actions have been taken to promote women's development. And the social context for women's life-quality and development is improving. In this regard, UN Women should be fully recognized for the tremendous work it has done.

Thanks to determined efforts over the years, dreams that were once beyond reach have come true: 143 countries have enshrined gender equality in their laws, thus removing legal barriers to women's participation in political and economic activities, and there is now a general consensus around the world that women should have access to education and employment, and enjoy freedom of marriage.

In many parts of the world, however, disparities remain in women's development, and inequality still exists between men and women in rights, opportunities and access to resources. Full recognition of women's potential, talent and contribution has yet to be achieved. Women account for more than half of the 800 million impoverished population of the world. They tend to bear the brunt of wars and epidemics, and they suffer deeply from terrorism and violence. As we speak, various forms of discrimination against women are still taking place. Abuses and inhuman treatment of women continue.

All this shows that we still have a long road to travel in achieving gender equality. We must work tirelessly to broaden the prospects for this cause.

In the Post-2015 Development Agenda we have just adopted, a gender perspective has been included in every item. Let us reaffirm the spirit of the Beijing Conference with renewed commitment and lose no time in promoting gender equality and women's all-round development.

First, we should fight for women's development in tandem with social and economic progress. Development cannot be achieved without women, and the benefits it brings must be shared by all. We need to come up with better and more-rounded development strategies that take into account national realities, gender differences, and the special needs of women, and aim to ensure women's equal share in the fruits of development. Policy measures should be updated to stimulate women's potential and raise their participation in the process of social and economic development. China's experiences show that a higher level of social and economic participation by women helps to raise their status, and it also boosts social productivity and invigorates the economy.

Second, we should protect women's rights and interests. Women's rights and interests are basic human rights. They must be protected by laws and regulations and integrated into national and social rules and norms. We must buttress women's capacity to play their part in society and the economy, enhance women's capability in decision-making and management, and support them in becoming leaders in the fields of politics, business and academia. We must ensure that basic medical services for women are sufficient, and pay particular attention to the health needs of rural women, women with disabilities, migrant women, middle-aged and elderly women, and women of ethnic minorities. We must ensure that school is affordable and safe for every girl, and develop vocational and life-long education for women to help them better adapt to changes in society and the employment market.

Third, we should strive to build harmonious and inclusive societies. Men and women live in the same one world. A society with less discrimination or prejudice against women is often more inclusive and dynamic. We must eradicate all forms of violence against women, including domestic violence. We should focus on gender equality and dismiss outdated mentalities and customs inhibiting women's development. I appreciate Secretary-General Ban Ki-moon's "He for She" Initiative, and hope more men will join that action.

Fourth, we should foster a global environment favorable to women's development. Women and children are the ones who suffer most when peace or tranquility is disrupted. We must stand firmly for peace, development and beneficial cooperation, cherish peace dearly and uphold it so that every woman and child will enjoy the sunshine of happiness and tranquility.

As the Chinese people pursue a better life, every Chinese woman has the opportunity to excel in life and make her dreams come true. China will do more to enhance gender equality as its basic state policy, give play to women's important role as "half the sky" and support them in realizing their own dreams and aspirations in both career and life. Women in China, through their own development, will also play a greater part in the global women's movement and make a greater contribution to gender equality throughout the world.

To support women's development worldwide and the work of UN Women, China will donate US$10 million to UN Women for the implementation of the Beijing Declaration and the Platform for Action and the realization of the related goals in the Post-2015 Development Agenda. In the coming five years, China will help other developing countries to build 100 "health projects for women and children," send teams of medical experts to provide services, and implement 100 "happy campus projects" to finance the schooling of poor girls and raise the school enrollment rate for girls. We will also bring 30,000 women from developing countries to attend training programs in China and provide vocational trainings for 100,000 women in other developing countries. Under the related fund co-sponsored by China and the United Nations, there will be special capacity-building programs for women from developing countries.

Let us work hand in hand and move faster to build a better world for women and for all!

I wish the Global Leaders' Meeting every success.