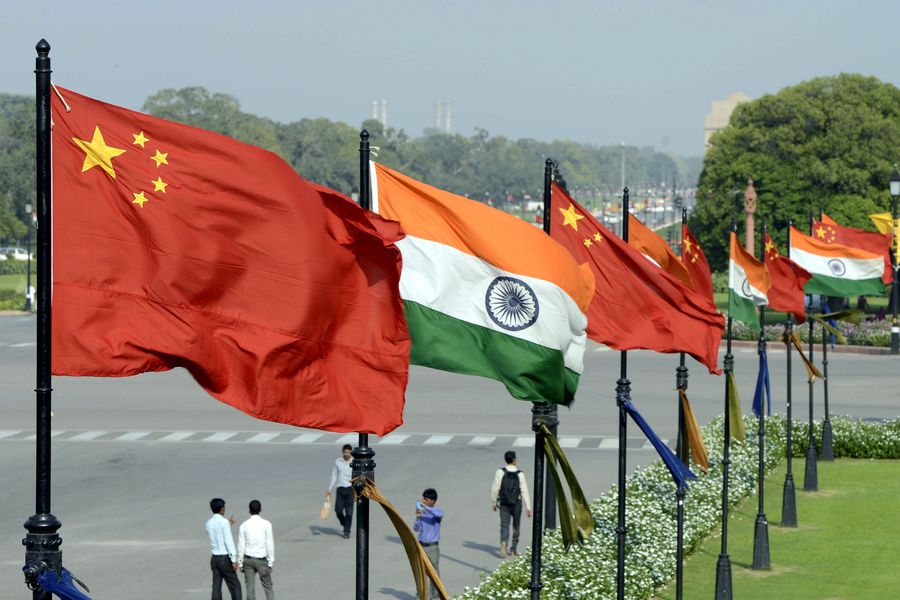 Indian and Chinese national flags flutter side by side at the Raisina hills in New Delhi, India, in this file photo. [Photo/Xinhua]

The Chinese and Indian leaderships appear to share a general consensus that the world's two most populous neighbors have a lot to lose and little to gain from a confrontational relationship.

Turning a close neighbor like each other into an open enemy and risking a substantial military conflict along their shared border may not only choke hopes for normal exchanges, but risk undermining the promising development potential of the two emerging economies.

Therefore, from personal meetings of the countries' leaders to formal government statements, what people have heard has mostly been hopes for peace and improvement in ties.

But if the frontline troops on both sides of the Line of Actual Control cannot work out a mutually accepted way to disengage from key friction areas and practice genuine restraint thereafter, the sometimes fatal border standoff, which has claimed dozens of lives and lasted 17 months, has the potential to do great damage to bilateral relations.

No joint statement was issued after the 13th round of talks between the Chinese and Indian army commanders on Sunday. But according to the People's Liberation Army Western Theater, the latest attempt to ease the frontier stalemate wasn't as successful as had been anticipated.

The main reason, according to a PLA Western Theater spokesperson, was the Indian side's failure to reciprocate the Chinese side's deescalation efforts. "Proceeding from the big picture of preserving relations between the two countries and militaries, the Chinese side made tremendous efforts, fully demonstrated sincerity for easing and cooling down the border situation in the talks," he said. "But the Indian side continued to insist on unreasonable and unrealistic demands, adding difficulties to the negotiations."

Stating that the Chinese side would not budge on a matter of sovereignty, the military spokesman urged the Indian side against misjudging the situation and cherish the hard-earned relative peace along the border.

Given the Indian side's attitude in the military-to-military talks, there seems to indeed be unrealistic calculations about the consequences of the tensions at the border regions. The populist, nationalist fervor being fanned by some Indian politicians and media may also have a role behind the Indian military's approach to the negotiations.

Yet at the end of the day, prolonging the border conflict harms not only the troops stationed along the LAC, but overall Indian national interests.

Some Indian politicians may believe they can profit from confronting China in the current geopolitical climate. But that is because they have blinded themselves to the enormous benefits good neighborly ties have brought, and will continue to bring to their country and people.