A positive momentum in China-Singapore ties

It is now a telling yarn that the United States is more than willing to divide and rule Southeast Asian nations as part of its strategy to counter China.

The Biden administration recently deployed Vice President Kamala Harris and Secretary of Defense Lloyd Austin to Southeast Asia to do just that. Both officials visited Singapore and delivered hawkish speeches seeking allies in the region against Beijing.

As is customary, they used the visit to highlight their self-defined success and role in preserving the rules-based world order and treaties, ways to face down China and to undercut the roles of others through short-termism and closure.

The only problem is that Singapore does not seem interested in taking sides between the two powers - just like many other nations in the strategic region. To substantiate, on September 14, when Singapore's Prime Minister Lee Hsien Loong met with Chinese State Councilor and Foreign Minister Wang Yi, he vowed to continue to work with Beijing, touting the cooperative relationship between the two neighbors.

In a Facebook post, Lee wrote, "Singapore welcomes China's continued contribution in our part of the world, and will continue working with China to build a more harmonious and peaceful world."

In a sense, Singapore, like many other nations, is determined to continue working with China to build a more harmonious and peaceful region for everyone. These nations don't trust or see the U.S. as a trustworthy partner. In their eyes, the U.S. is hyper-focused on Southeast Asia and the Indo-Pacific region as a region for influence, not as a region that needs peace and cooperation. No, the U.S. is not fixated on environmental protection, maritime sovereignty, and safety either.

Not surprisingly, the entire spectacle has been tiresome and unproductive for the U.S. as a consequence. On the other hand, Lee Hsien Loong and other officials from the region have been lauded for their courage and effort to highlight China's ongoing success in preserving the rules-based international order, regional treaties and agreements, as well as ways to face down the U.S. and its go-it-alone approach and short-termism through multilateralism and regional cooperation.

With the weakening of the economy and pillars on which so much of America's paramount power rested, China and Singapore have a lot to gain from each other. This includes advancing cooperation with China on Singapore's government projects and exploring new areas of cooperation such as the digital economy and infrastructure. 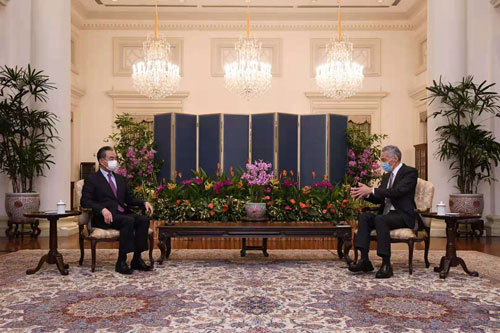 To that end, China has been spending hundreds of billions of dollars on its Belt and Road Initiative (BRI) to construct a transcontinental grid of railroads, oil pipelines, and industrial infrastructure. More specifically, China and Singapore could use the BRI to minimize the American influence without a shot being fired in the region.

Remember, Singapore's officials have even welcomed China's interest in the Comprehensive and Progressive Agreement for Trans-Pacific Partnership (CPTPP), which is a free trade agreement between 11 countries that include Australia, Canada, New Zealand, Singapore and Vietnam. It's all the reason why China and Singapore have witnessed fruitful exchanges and cooperation in different fields since the establishment of diplomatic relations.

Make no mistake. Singapore hopes other nations will have positive interactions with China as well, and that they would work with China to jointly build a global village in the era of globalization. But this could only be the case if they continue to consolidate ties with the Association of Southeast Asian Nations countries as well.

These nations need to speed up the consultations on the Code of Conduct in the South China Sea, uphold the regional framework with ASEAN at its core, and facilitate regional development and prosperity. Needless to say, this conforms to the fundamental interests of all sides, and contributes to regional stability, openness and cooperation.

On a planet that needs some genuine human investment, the choice is not whether to do business with China or the United States - as Harris and Austin would like to suggest. It is to voice dismay at Washington's geographical setting and colonial mindset deemed hostile to China's foreign policy of lasting peace, universal security and common prosperity. It's a foreign policy that seeks to build a new type of international relations and a community with a shared future for mankind.

In short, the time has come for the Southeast Asian countries to stop depending on American decisions. They need to call for the creation of a regional order that would give them greater decision-making autonomy and greater capacity for action.

To pursue a foreign policy free from Washington's influence and to change the contours of this colonial mindset, China, Singapore and other regional countries stand to win if they take this positive momentum to have in-depth strategic communication with each other. They can, and they should, deepen their strategic trust to ensure fresh progress of the multilateral comprehensive and strategic partnership championed by the visionary politicians in Beijing.

The author is a London-based journalist, guest contributor in print, radio and television, and documentary filmmaker.