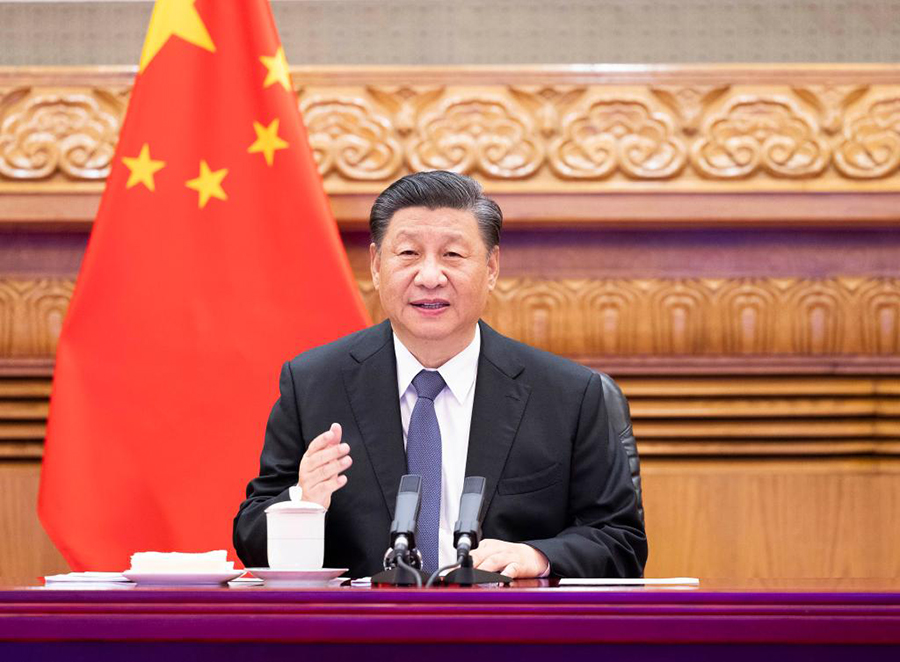 BEIJING, July 5 (Xinhua) -- Chinese President Xi Jinping on Monday held a virtual summit with French President Emmanuel Macron and German Chancellor Angela Merkel in Beijing, calling on China and Europe to expand consensus and cooperation for the two sides to play an important role in properly responding to global challenges.

Noting the persisting severe situation of COVID-19 globally and the uncertain prospect of economic recovery, Xi said the world more than ever needs mutual respect and close collaboration, rather than suspicion, antagonism or zero-sum game.

Xi urged the two sides to uphold correct mutual cognition. Over the past 100 years, the Communist Party of China has led the Chinese people in opening up a development path suited to China's national realities that has won universal support of the Chinese people, Xi said, adding China has been committed to the common values of humanity including peace, development, fairness, justice, democracy and freedom.

China and Europe have engaged in cooperation based on the principles of mutual respect and seeking common ground while shelving differences, Xi said, adding the China-EU comprehensive strategic partnership is where the greatest common denominators converge.

"We should uphold this spirit, view each other's differences in a correct way, rationally handle divergences, and ensure ties between the two sides move forward," said Xi.

He went on to call for expanding mutually beneficial cooperation for win-win results. Xi said China is willing to convene the 23rd China-EU leaders' meeting with the European side at an early date, conduct high-level dialogues in strategic, trade, cultural, digital and climate sectors, and advance mutual recognition and protection of products listed in the China-EU agreement on geographical indicators to deliver more tangible benefits to the people.

In the context of the COVID-19 prevention and control, Xi said the two sides should keep optimizing "fast tracks" for personnel exchanges.

As China is firmly committed to further opening up, Xi expressed the hope the European side can provide just, transparent and non-discriminatory business environment for Chinese enterprises in accordance with market principles.

He also urged safeguarding the real multilateralism. The international system with the United Nations (UN) at its core and the basic norms governing international relations based on the UN Charter must be upheld, and global issues should be addressed via consultations of all parties in a reasonably calm manner, he said.

He also called on the two sides to jointly steer the reform of the World Trade Organization in a correct direction, and offer mutual support in ensuring a successful Beijing Winter Olympics and Paris Olympics.

Xi called for building a major-country relationship that is generally stable and balanced. "What China craves for most is to develop itself rather than replace others," said Xi, noting the Belt and Road Initiative put forward by China is to create more opportunities for common development.

Xi said China is ready to enhance dialogue and cooperation with all parties, at the same time, it will firmly defend its sovereignty, security and development interests. "We hope the European side can play a more positive role in global affairs, genuinely demonstrate strategic independence, and jointly safeguard world peace, stability, development and prosperity," added Xi.

The leaders of the three countries also exchanged views on African issues. President Xi pointed out that Africa is the region most concentrated with developing countries, facing the most difficult tasks of fighting the COVID-19 pandemic and achieving economic recovery, it is also the continent with the greatest development potentials.

Xi said China has provided and is currently providing vaccines to more than 40 African countries and the African Union Commission, and actively supports Africa in enhancing its vaccine production capacity.

China has signed debt relief agreements or reached debt relief consensus with 19 African countries, and has participated constructively in sustainable development plans such as the Great Green Wall in Africa, the Chinese president said.

Xi expressed the hope that Europe could increase its support and assistance to Africa, provide more vaccines to African countries in urgent need, and help Africa cope with debt pressure and realize economic recovery and green and low-carbon development at an early date.

China welcomes France and Germany to join the Initiative on Partnership for Africa's Development, which was jointly launched by China and African countries, and carry out trilateral, four-party or multi-party cooperation, Xi added.

French President Emmanuel Macron said over the past few decades, China has made great achievements in its development. France is committed to promoting cooperation with China in a practical manner, supports the conclusion of the EU-China investment agreement and the strengthening of cultural exchanges, and welcomes Chinese companies to invest in France, he said.

Macron said France stands ready to maintain communication with China on issues such as the World Trade Organization reform, climate change and biodiversity protection. He expressed the hope that the 15th meeting of the Conference of the Parties to the Convention on Biological Diversity in Kunming and the 7th International Union for Conservation of Nature's World Conservation Congress in Marseilles will both be a success.

France appreciates China's important role in ensuring equitable access to vaccines for developing countries, and is willing to strengthen cooperation with China, he said, adding that France highly values China's efforts to implement the debt service suspension initiative launched by the G20, and is ready to strengthen coordination with China on financing and education issues in Africa.

German Chancellor Angela Merkel said it is very important for the leaders of Germany, France and China to maintain exchanges, and that Germany stands ready to strengthen coordination and cooperation with China on promoting fair production and distribution of vaccines, and on restoring personnel and trade exchanges.

Noting that the EU-China relationship is very important, she said the two sides share consensus on many issues and can cooperate in many areas, and that they should respect each other and reduce differences through enhanced dialogue.

Germany supports the convening of the 23rd EU-China leaders' meeting at an early date, and hopes that the EU-China investment agreement will be approved as soon as possible, Merkel said.

Germany hopes to strengthen cooperation on international affairs with China and is willing to maintain communication with China on climate change, biodiversity and Africa's response to the pandemic, she said, adding Germany will actively look into the possibility of joining the Initiative on Partnership for Africa's Development.

The leaders also exchanged views on issues including the Iran Nuclear issue, Afghanistan and Myanmar. 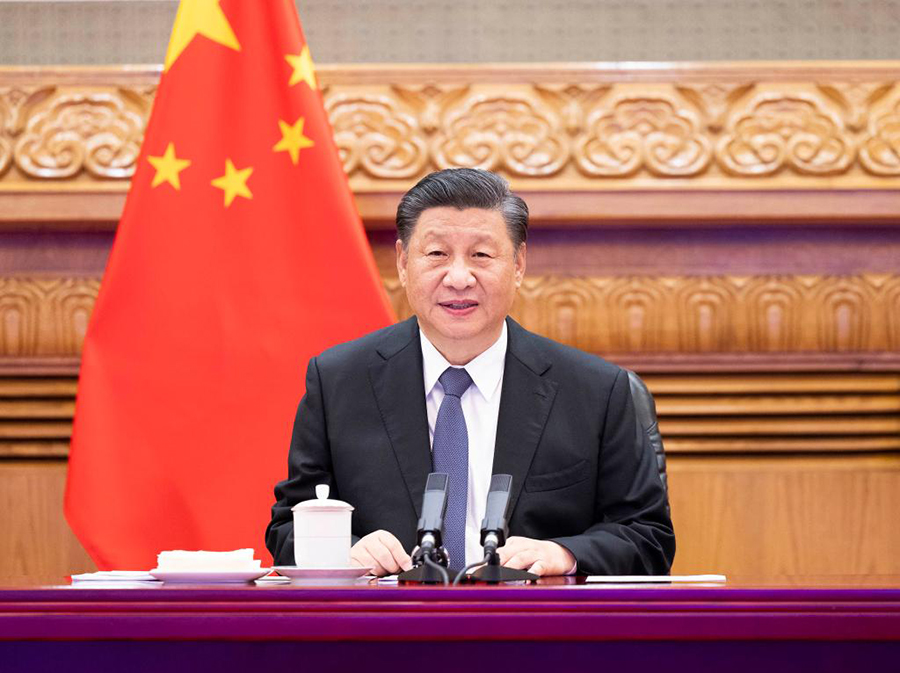 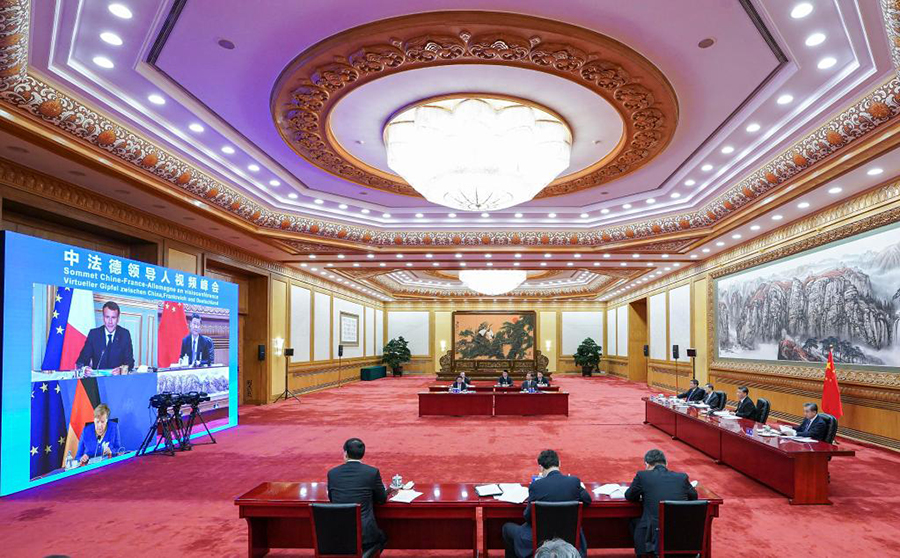