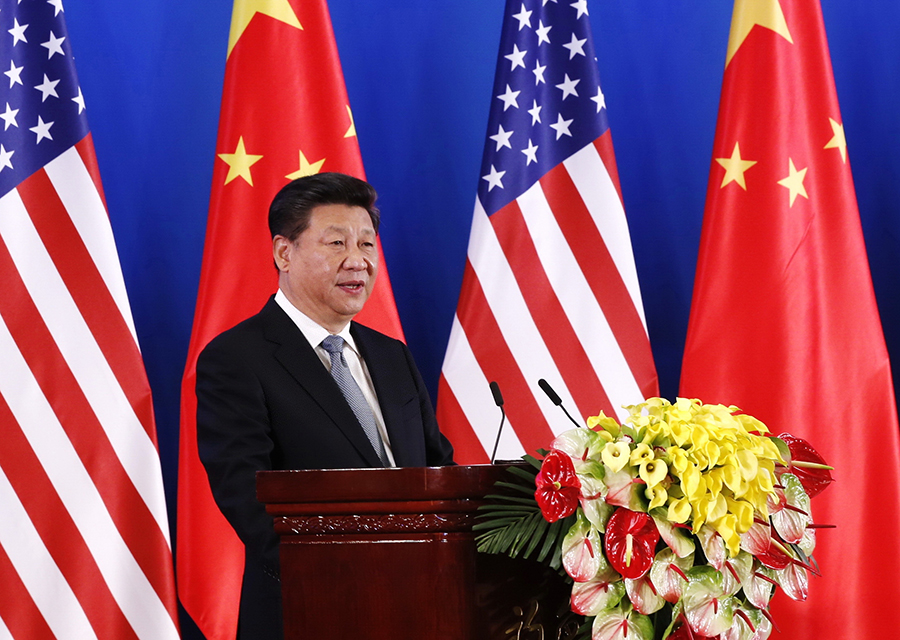 Chinese President Xi Jinping delivers a keynote speech at the joint opening ceremony of the eighth China-U.S. Strategic and Economic Dialogue and the seventh China-U.S. High-Level Consultation on People-to-People Exchange, in Beijing, capital of China, June 6, 2016. [Photo by Ju Peng/Xinhua]

Secretary of the Treasury Jacob Lew,

Today, the eighth round of the China-US Strategic and Economic Dialogue (S&ED) and the seventh round of the China-US High-level Consultation on People-to-People Exchange (CPE) are held here in Beijing. Let me begin by extending hearty congratulations on the opening of the S&ED and the CPE and a big welcome to American friends who have traveled all the way to China.

Almost around this time three years ago, President Obama and I met at the Annenberg Estate where agreement was reached for the two sides to step up strategic communication, expand practical cooperation, properly manage differences and work vigorously to build a new model of major-country relationship between China and the United States.

Hard work pays off, and our efforts over the past three years have come to fruition. Thanks to our concerted efforts, our two countries have cooperated at the bilateral, regional and global levels in a wide range of areas, registering new progress in our relations. We witnessed record highs in trade and two-way investment, enjoyed closer people-to-people and sub-national exchanges, and made new headway in cooperation in cyberspace, law enforcement and military-to-military exchanges. We issued three joint statements on climate change, and worked together with other countries for the conclusion of the historic Paris Agreement. We maintained effective communication and coordination on hotspot issues like the Korean nuclear issue, the Iranian nuclear issue, and Afghanistan and Syria. Such cooperation has brought tangible benefits to both countries and given a strong boost to peace, stability and development of the Asia-Pacific and beyond.

What we achieved over the past three years has not come by easily, and could well serve as guide for the growth of China-US relations in the time to come. Most important, I believe, is that the two sides need to stay committed to the principles of non-confrontation, non-conflict, mutual respect and win-win cooperation, and work steadily toward this new model of major-country relations, for this is a choice that meets the fundamental interests of both the Chinese and American people as well as the wish of all people in the world. Whatever changes in the international landscape, we need to stay on track and work unswervingly toward this overarching goal.

We now live in a world of rapid development and changes. The move toward multi-polarity, the increasing trend of globalization, and the quick application of information technologies have all been accompanied by growing challenges of various sorts, and have brought countries even closer than ever before. It is a time when ideas of zero-sum game and conflicts and confrontation must give way to common development and win-win cooperation. It thus falls upon China and the US, the largest developing and developed country respectively, and the two largest economies in the world, to act in the fundamental interests of our people and people of the world, and move steadily forward along the path of building this new model of major-country relationship.

China and the US need to increase mutual trust. For the Chinese, trust is always something to be cherished. In the word of Confucius, who lived over 2,000 years ago, a man without trust can hardly accomplish anything. Trust stands as the basis of relationship among people, and provides a prerequisite for state-to-state exchanges. For China and the US, we need to maintain frequent communication and build up strategic mutual trust in order to avoid strategic misjudgment and prevent temporary problems from affecting our overall relations. With sufficient mutual trust, China-US cooperation will stand on a more solid basis and enjoy even more robust growth.

China and the US need to expand mutually-beneficial cooperation. Over the past 37 years since the establishment of diplomatic ties, China-US cooperation has grown steadily in both width and depth, bringing real benefits to our people. We need to embrace a win-win perspective and move our cooperation to a higher level. It is imperative that we increase macro-economic policy coordination and work together with other parties concerned to ensure that the G20 Hangzhou Summit delivers positive outcomes to boost confidence and invigorate global growth. It is important that we do our best to conclude a mutually-beneficial bilateral investment treaty at the earliest possible date to foster a new highlight in business and trade cooperation. And it is important that we deepen exchange and cooperation in climate change, development, cyber issues, counter-terrorism, non-proliferation, military-to-military relations and law enforcement, and step up communication and coordination on major international and regional issues as well as issues of global significance. This way, we could bring more real benefits to our people and provide more public goods for greater peace, stability and prosperity of the world.

China and the US need to properly manage differences and sensitive issues. China and the US, each with its own uniqueness, are different in terms of history, culture, social system and people's aspiration. Differing views between us are hardly avoidable. In fact, in this world of diversity, differences among countries are just natural. Even family members do not always see eye to eye. One should not be afraid of differences. What is most important is to refrain from taking the differences as excuses for confrontation. There are differences that could be addressed by redoubling our efforts. For those differences that cannot be settled for the time being, we need to manage them in a pragmatic and constructive fashion by putting ourselves in each other's shoes. As long as we observe the principles of mutual respect and equality, shelve differences to seek consensus, and try to resolve them through expanding common ground, we will be able to overcome difficulties and obstacles, and prevent major disruptions in bilateral relations.

China and the US need to increase communication and cooperation over Asia-Pacific affairs. The vast Pacific should be a stage for inclusive cooperation, not an arena for competition. China pursues a neighborhood diplomacy of amity, sincerity, mutual benefit and inclusiveness, and is committed to advancing peace, stability and development in the Asia-Pacific region. The extensive common interests between China and the US in the Asia-Pacific make it possible for the two countries to keep frequent communication, have more cooperation, and jointly respond to challenges. The two countries may work together to foster a "circle of common friends" that is inclusive rather than exclusive, and both countries should play such a role that they will build and maintain prosperity and stability of this region.

China and the US need to enhance friendship among the people. Friendship and exchange among the people provides constant driving force for growing bilateral relations. Mutual understanding and friendship of the peoples provides the basis for the growth of China-US relations. I visited the US many times. Be it my old friends in the State of Iowa, or the lovely children I met in the Lincoln High School of Tacoma, the American people have moved me deeply with their friendly sentiments towards the Chinese people. And I am glad to note that last year alone, some 5 million visits were made between the people of both sides. What we need to do is to build more platforms and keep facilitating these exchanges, so that the friendship between our people will go on from generation to generation.

This year marks the beginning of China's 13th Five-Year Plan. China will follow its strategic plan to build a society of moderate prosperity in all respects, and will comprehensively deepen reform, strengthen the rule of law, and enhance Party discipline. China's development will be guided by the principle of innovative, coordinated, green, open and shared development. China will redouble efforts to promote supply-side structural reforms, shift growth model through restructuring, and achieve better opening-up. We are confident that the goals set for economic and social development will be met as planned. China's development will mean more opportunities for the world and China will have even closer cooperation with the US and other countries.

China is committed to the path of peaceful development. China calls on all countries to follow such a path and work to promote a new model of international relations featuring win-win cooperation, so as to foster a community of shared future for mankind. China will strengthen cooperation with other countries to jointly uphold the international order and system with the purposes and principles of the UN Charter at the core and make the existing international order more just and equitable. Working together, we can make the world a better place to live in.

The S&ED and the CPE have played a significant role in increasing strategic mutual trust, expanding mutually-beneficial cooperation, and deepening friendship among the people. I wish to express heartfelt appreciation to our teams and to people from all walks of life of the two sides who have taken a great interest in and acted to support the dialogues and consultations. I hope that in the following two days our teams will rise up to their responsibilities, make persistent efforts to build consensus and produce more deliverables in the talks.

Xin Qiji, a poet in China's Song Dynasty, once wrote, "Thick mountains could not stop the river from flowing into the sea." In fact, all rivers have to travel a meandering course before reaching their destination. For China and the US, as long as we stay focused on our goal and persevere in our efforts, we will be able to make even greater progress in building the new model of major-country relationship and deliver greater benefits not just to the people of our two countries but to people of all countries in the world.

To conclude, I wish this round of the China-US S&ED and CPE a complete success.