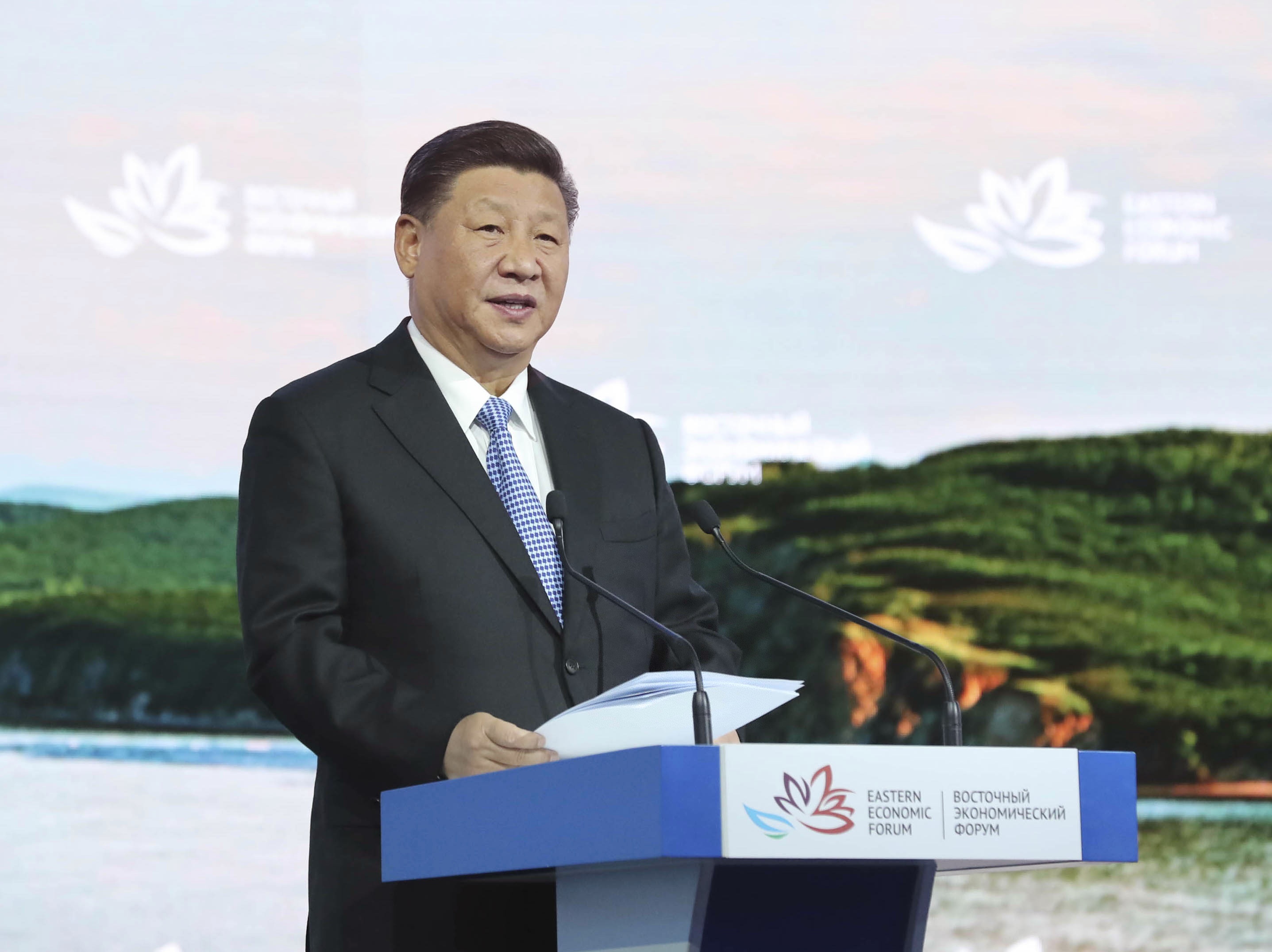 VLADIVOSTOK, Russia, Sept. 12 (Xinhua) -- Chinese President Xi Jinping on Wednesday called on countries in Northeast Asia to seize the historical opportunity and conform to the trend of the times to strengthen cooperation in the Russian Far East and Northeast Asia for a better future of the region.

He made the remarks while addressing the plenary session of the fourth Eastern Economic Forum (EEF) in Vladivostok in Russia's Far East.

Xi proposed that countries in Northeast Asia should build up mutual trust to safeguard regional peace and tranquility; deepen cooperation to achieve mutually-beneficial and win-win outcomes; learn from each other to consolidate their traditional friendship; and take a long-term perspective to realize integrated and coordinated development.

As a member of Northeast Asia, China has always upheld the concept of peaceful development to create a harmonious and friendly neighboring environment; participated in regional cooperation in the spirit of mutual respect and in a constructive manner; and endeavored to promote exchanges and dialogues while taking into consideration the concerns of all parties, Xi said.

"The Chinese side is willing to continue to work with all other sides to constantly consolidate unity, build up mutual trust, explore effective ways to maintain lasting peace and stability in Northeast Asia, and make unremitting efforts to achieve peace, stability and development in the region," he said.

"In this regard, the Chinese side supports the Asian Infrastructure Investment Bank and the Silk Road Fund in playing a greater role by guaranteeing the project fund," he said.

Xi expressed the hope that the regional countries can expand ways of communication, innovate forms of cooperation, and facilitate the exchanges among the people of all age groups.

The president also called on the regional countries to explore new models for coordinated development in Northeast Asia, speed up scientific and technological innovation, foster a resource-saving and environment-friendly industrial pattern and way of life, and jointly tackle the regional environment issues that all countries are facing.

Xi said that China stands ready to work with all the other regional countries to strengthen cooperation in the Russian Far East and Northeast Asia to push for the diversified and sustainable development of the region, and make the pie of common interests ever bigger, thus allowing the people in the region to share cooperation opportunities and development achievements and jointly creating a better tomorrow for the Far East and Northeast Asia.

In his address, Xi also elaborated on the achievements China and Russia have made in their Far East cooperation over the past years.

During the question and answer session, Xi talked about the Belt and Road Initiative and the Korean Peninsula situation.

In his speech, Putin extended his welcome to businesses of all regional countries to invest in Russia and share the development opportunities of the Far East, saying the region is now a priority in the country's development.

The leaders of the other countries also expressed their willingness to participate in the development of the Russian Far East and promote cooperation in Northeast Asia.

After the plenary session, the leaders attended an award ceremony for the first race of the SCF Far East Tall Ships Regatta 2018.

The EEF was launched in 2015 on the personal initiative of Putin. Xi's attendance is the first by a Chinese head of state at the forum.

This year's forum, with the theme of "The Russian Far East: Expanding the Range of Possibilities," kicked off on Tuesday and will last till Thursday.