Building a common home of security, stability, development and prosperity 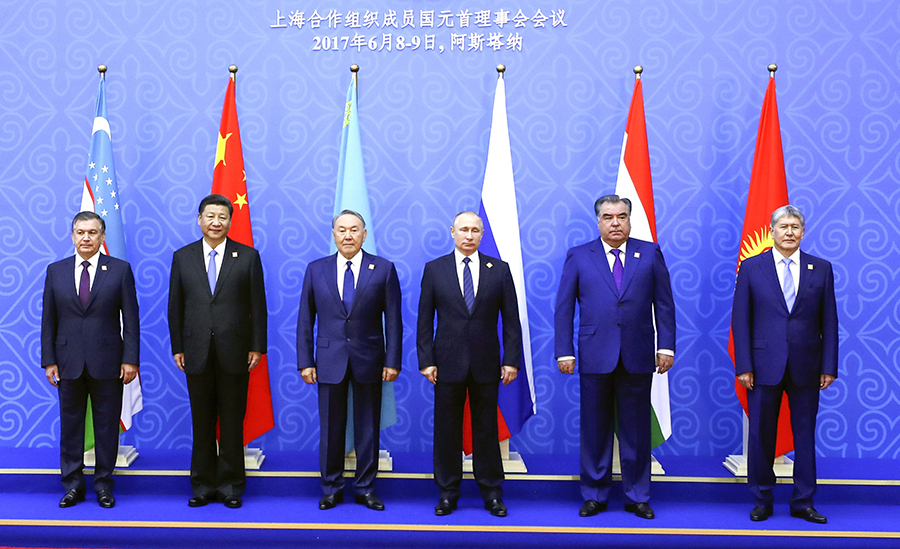 The following is the full text of the speech given by Chinese President Xi Jinping at the 17th Meeting of Council of Heads of States of the Shanghai Cooperation Organization (SCO):

Building a Common Home of Security, Stability, Development and Prosperity

I am very pleased to be here in Astana to attend the SCO Summit. The vibrancy that this city displays is also a vivid reflection of the robust growth of the SCO.

I would like to thank the host country Kazakhstan and President Nazarbayev for the meticulous preparation and thoughtful arrangements. In the past year, Kazakhstan has done tremendous amount of effective work as the SCO President, which the Chinese side speaks highly of.

This year marks the 15th anniversary of the signing of the Charter of SCO as well as the 10th anniversary of the Treaty on Long-term Good Neighborliness, Friendship and Cooperation. The two documents lay down the principles and give guidance to SCO member states in their work. Firmly committed to the Shanghai Spirit, SCO member states are making solid progress on the road of building a community of shared future, thus establishing a fine example of the new type of international relations featuring win-win cooperation. In this context, today we are going to admit India and Pakistan as new member states of the SCO.

At present, the international and regional situation is undergoing profound and complex changes. Destabilizing factors and uncertainties are on the rise. Only through cooperation can countries properly meet threats and challenges. China is willing to work together with all parties to strengthen the sense of community of shared future, and build a common home of security, stability, development and prosperity. To this end, I would like to propose the following.

First, strengthen solidarity and coordination. As a saying in Kazakhstan goes, where there is solidarity, happiness will follow. The Shanghai Spirit has inspired a strong sense of solidarity which ensures the growth of the SCO. We should carry forward this fine tradition of solidarity and coordination. All member states, old and new, should work in close coordination, deepen mutual trust and increase mutual support in their endeavor to build a community of shared future featuring equality, mutual support, solidarity and sharing of weal and woe. It is China's proposal for the SCO to draw up a 5-year outline for implementation of the Treaty on Long-term Good Neighborliness, Friendship and Cooperation. This will help set the direction for SCO cooperation in all fields in the next phase. It is suggested that exchange and cooperation between legislative bodies, political parties and in the judicial fields be increased so as to provide channels of policy communication for all parties.

Second, join hands to tackle challenges. Security is the prerequisite for development. Without security, there will be no development to speak of. Recent acts of terrorism in this region show that the fight against the three forces remains a long and arduous task. We should continue to give priority to the SCO's commitment to maintain regional security and stability. China supports the enforcement of the SCO Convention on Combating Extremism to be signed at the Summit. This will effectively contain the spread of extremism. To enhance the capacity of member states in coordination and implementation in the security field, China calls for the SCO to strengthen regional counter-terrorism institutional building and resolutely crack down on illicit drug manufacturing and trafficking. China is willing to host again the SCO joint counter-terrorism cyber exercise. China proposes to hold a defense security forum and formulate a three-year program of cooperation to fight the three forces. China supports the SCO in speaking with one voice on international and regional issues. The SCO can contribute to finding political settlement to hotspot issues. China is concerned with the deteriorating security situation in Afghanistan recently, and calls upon all parties to support the country's peace and reconciliation process. We hope the SCO-Afghanistan Contact Group will play an even more active role for Afghanistan's peace and reconstruction.

Third, deepen practical cooperation. Regional integration and economic globalization are the trends of our times, and it is important for them to bring benefits to all countries and peoples. Last month, the Belt and Road Forum for International Cooperation was successfully held in Beijing. China and the parties concerned are now actively exploring ways to synergize the Belt and Road Initiative with regional cooperation initiatives like the Eurasian Economic Union and national development strategies, including the "Nurly Zhol" of Kazakhstan. The SCO may well serve as an important platform for this endeavor. It is China's suggestion to gradually put in place institutional arrangements for regional economic cooperation, and we may begin with a SCO trade facilitation agreement. For greater connectivity between regional countries, China supports the opening of the cross-border routes on schedule as prescribed in the Agreement between the Governments of the Member States of the Shanghai Cooperation Organization on Creating Favorable Conditions for International Road Transportation. China welcomes non-SCO countries in our region to join the Agreement, and endorses the formulation of a plan for coordinated development of roads among SCO member states. To mobilize more resources and driving force for practical cooperation under the SCO framework, China supports the establishment of a mechanism for sub-national cooperation and has vigorously promoted SME cooperation by its initiatives of economic think-tanks alliance and e-commerce alliance of the SCO. China suggests that we fully utilize the existing platforms to raise finance for SCO projects, while at the same time exploring at the expert level possible ways to establish the SCO development bank.

Fourth, enhance people-to-people bonds. It is important for SCO countries to bring our people, youth in particular, closer to each other, so that the good-neighborliness and cooperation between us will be carried forward by the future generations. China is ready to work with other parties to ensure the success of the SCO University, as well as SCO's brand projects such as the youth exchange camp and the summer camp for elementary and middle-school students. China would like to host such SCO activities as the cultural and art festival, women's forum and skills contest of workers, and strive for solid progress of SCO cooperation in health, disaster relief, environment protection, sports and tourism. China will launch a "China-SCO cooperation program in human resources development", under which China will invite representatives from SCO states to seminars and workshops in China, send Chinese experts to SCO states to give policy advice, carry out local training programs in SCO states and provide government scholarships. With this, we hope to broaden and deepen China's cooperation with other SCO members in human resources development. Closer people-to-people ties would not be possible without the positive role of the media. Hence China suggests setting up a mechanism for media cooperation, and would like to host the first SCO media summit.

Fifth, uphold openness and inclusiveness. Openness has been a defining feature of the SCO since its inception. China supports the SCO in carrying out cooperation of various forms and in a broad range of areas with its observer states and dialogue partners as well as other countries, and in further reviewing the applications from the related countries for legal status in the SCO in accordance with its regulations and the principle of consensus. China stands for more exchanges and cooperation between the SCO and the United Nations and other international and regional organizations, in a joint effort to promote lasting peace and shared prosperity in the world.

China highly commends the work of the two permanent bodies of the SCO and will make an additional contribution of RMB10 million to the Secretariat for it to improve working conditions and undertake more activities.

After this summit, China will take over the rotating presidency of the SCO and host the next summit in June 2018. China will make best efforts to fulfill the task and work with all other parties to give our people a greater sense of ownership and usher in an even brighter future for the SCO.