Build a universal and secure community of shared future for mankind 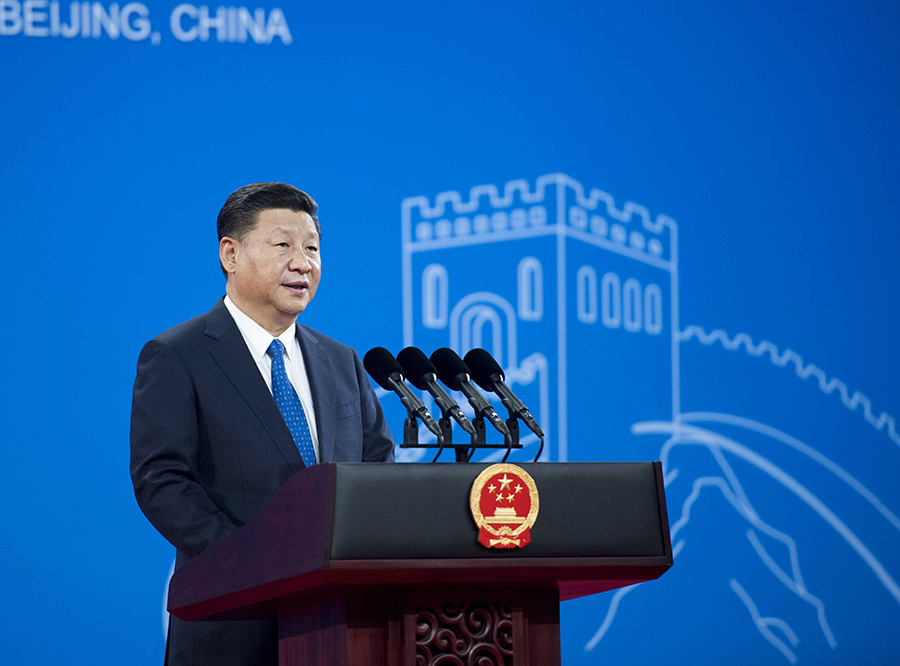 Stressing to Hold High the Banner of Cooperation, Innovation, the Rule of Law and Win-Win Results and Build a Universal and Secure Community of Shared Future for Mankind

At around 9:30 a.m., Xi Jinping entered the venue, and all participants warmly applauded for his arrival.

Xi Jinping delivered an important speech amid warm applause. He pointed out that since the founding of the Interpol for nearly a century, it has regarded the promotion of mutual trust, coordination and global security as its mission and followed the principle of making the world safer. The Interpol has also played an irreplaceable role in synergizing the consensus among polices across the globe, deepening international law enforcement and security cooperation and combating crimes. Since the restoration of the legitimate position of Interpol in 1984, China has abided by the mandate of Interpol and complied with the constitution of Interpol, continuously deepened its cooperation with Interpol and other member states in law enforcement and security, and made due contributions to the maintenance of global security and stability.

Xi Jinping emphasized that the inter-connected, trans-national and diversified security issue is becoming more conspicuous in the current world and security is a major issue that concerns the fate of mankind as a whole. In order to promote peace and development, we should, first and foremost, maintain security and stability. There will be no peace and development without security and stability. China is willing to join hands with the governments of all nations and their law enforcement agencies as well as all international organizations to hold high the banner of cooperation, innovation, the rule of law and win-win results, in a bid to strengthen collaboration in the realms of police service and security and build a universal and secure community of shared future for mankind.

Firstly, we should adhere to cooperation and joint construction to achieve the everlasting security. The fate of the whole world shall be shared by all countries, and global affairs should be discussed and deliberated by all countries. Security is a two-way and interconnected issue. All countries shall have equal rights to participate in international and regional security affairs and take the obligations to maintain international and regional security. The major countries should play their due part and at the same time support and encourage other countries to participate in global security governance in an extensive and equal manner, especially that of those developing countries. All countries should adopt a concept of common, comprehensive, cooperative and sustainable security, and establish a sense of cooperation in dealing with security challenges, so as to seek security and stability with cooperation, promote peace and development with security and strive to create a long-standing and stable environment for all the people in the globe.

Thirdly, we should stick to the spirit of the rule of law to achieve fairness and justice. The rule of law is an important achievement of human political civilization and also a basic method of modern social governance. To carry out law enforcement and security cooperation between countries, it is necessary to abide by the respective legal provisions of the two countries and to ensure that international law is equally applicable. Double standards and the practice of applying international law in a selective way should be rejected. We should uphold and maintain the UN Charter and the constitution of Interpol, earnestly carry out the convention against transnational crimes and the corruption, and constantly improve the relevant international rules to ensure that the international order is fair and reasonable, and the human society is fair and just.

Fourthly, we should insist on mutual benefit and win-win results to achieve balance inclusiveness. All parties should firmly adhere to the concept of win-win, multi-win and joint-win. When in the pursuit of our own security, we should also take into account the security of other countries, and strive to work out a mutually beneficial and win-win security path. Only by giving consideration to both justice and interests can we obtain both. And only by obtaining the balance between both can we achieve win-win results of both. To establish the correct concept of justice and interests, the major countries are required to offer greater support to underdeveloped countries and regions in security and development.

Xi Jinping stressed that realizing national development is China's contribution to the world, so is its achievement in the national security and stability. To provide people with a safe and sound living environment is an important target for China's state governance and administration. In recent years, we are making constant efforts to build a peaceful China and a China of law-based governance by combating and closely guarding against crimes of various kinds. We also strengthen the construction of crime prevention and control system in an all-round way to promote the modernization of social governance system and governance ability. At present, China is safe and stable, with a harmonious social order and people living in peace and happiness. Therefore, more and more people believe that China is one of the most secure countries in the world, which is an important contribution China has made to the global security and stability.

Xi Jinping pointed out that China has been earnestly fulfilling its duties, complying with international rules, carrying out its international obligations and actively participating in and calling for global law enforcement cooperation and global security governance while managing its own affairs well. China has resolutely supported international fight against terrorism and carried out international collaboration in combating cyber crimes. China has also put forward the shared responsibility and co-governance in the international anti-drug cooperation, and worked with relevant countries to launch anti-corruption fugitive repatriation and asset recovery and to fight against telecom fraud and other crimes. We are fully engaged in the law enforcement and security cooperation within the international and regional cooperation frameworks such as the United Nations, International Criminal Police Organization, Shanghai Cooperation Organization, and China-ASEAN cooperation. We have also built the mechanism of law enforcement and security cooperation along the Mekong River, and established the International Law Enforcement Cooperation Forum on Secure Corridor of the New Eurasian Land Bridge. China stands firmly by and actively participates in the UN peacekeeping operations and sends the most peacekeepers among the five permanent members of the UN Security Council.

Xi Jinping emphasized that China speaks highly of Interpol's efforts in protecting the world security and stability, and will continue to support Interpol so that it can play an even more important role in global security governance. The Chinese government will provide stronger support to the global activities of Interpol in the coming five years, and increase its support in the construction of the law enforcement ability of Interpol as well as in the promotion of Interpol's global governance and leadership.

Xi Jinping noted that the road of peace and development will not be smooth, so all countries need to strive to work together for building a community of shared future for mankind. China is willing to work closely with all the UN members and international organizations and institutions for full cooperation and actively take part in global security governance, making new and greater contributions to the lofty undertaking of mankind's peace and development.

Xi Jinping took a group photo with Secretary General and Members of Interpol Executive Committee before the opening ceremony.

Interpol is an international law enforcement cooperation organization with the widest coverage, the largest number of member states, and the broadest representativeness in the world. The 86th Interpol General Assembly is held in Beijing from September 26 to 29, bringing about law enforcement officials, heads of Interpol and representatives of relevant international organizations from 158 countries and regions.