Building partnership together toward a bright future 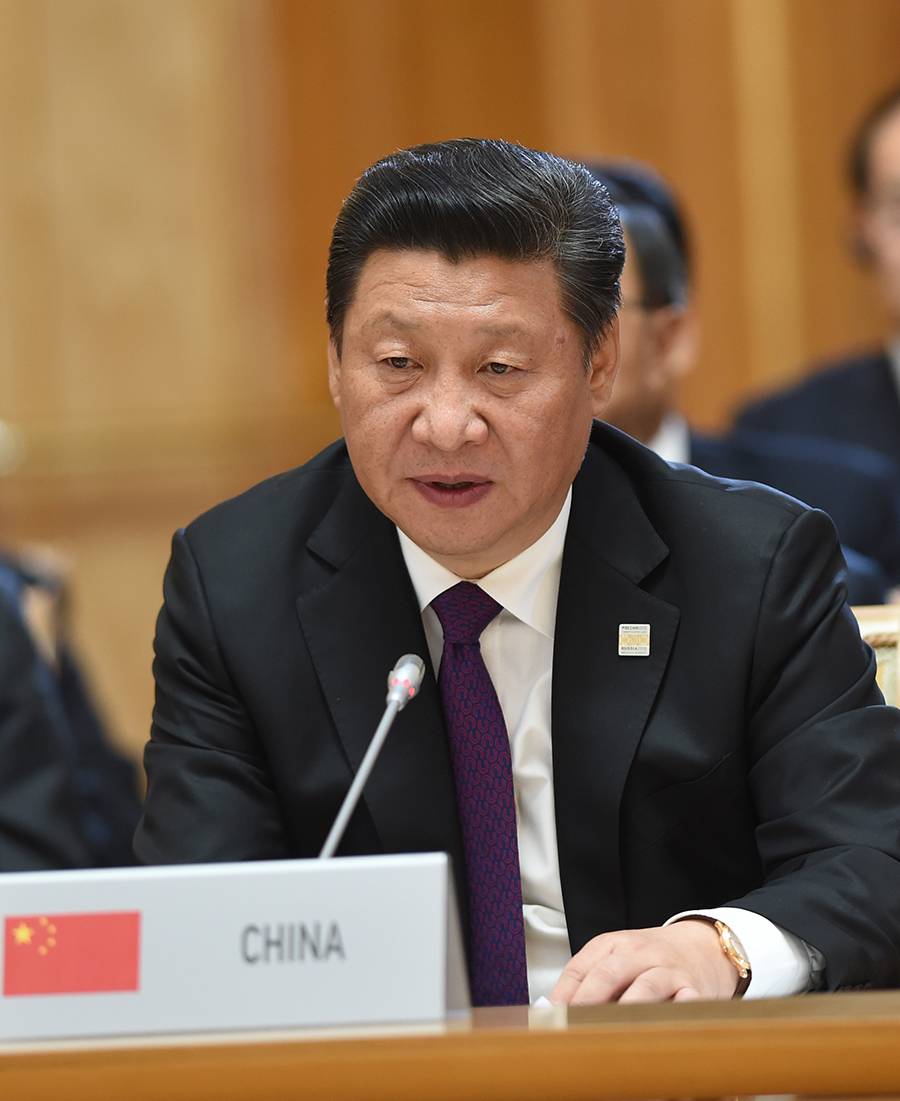 Remarks by H.E. Xi Jinping President of the People's Republic of China at the Seventh BRICS Summit

It gives me great pleasure to meet all of you again in the beautiful city of Ufa. I wish to thank President Putin and the Russian government for the thoughtful arrangement.

The Ufa Summit has brought BRICS leaders back to Russia after six years, which, in my view, is of great significance to the BRICS process. The past six years has indeed witnessed a momentous journey for BRICS cooperation.

-We have worked to promote world economic growth, improve global economic governance, and enhance the representation and voice of the emerging markets and developing countries in international economic and financial affairs, and provided new momentum and drive to the World Bank, IMF and other traditional international financial institutions.

-We have expanded the scope of our cooperation step by step, and put in place a multi-layered and all-dimensional structure of cooperation, covering political, economic, financial, trade, social, cultural and people-to-people exchanges. We have kicked off the preparations for the New Development Bank and launched the Contingent Reserve Arrangement, which testifies to the effectiveness and capability of BRICS cooperation.

At present, the world economy is still undergoing deep adjustment in the wake of the international financial crisis, and factors of instability and uncertainty are on the increase. To the emerging markets and developing world in general, risks and challenges continue to mount and economic growth has slowed down. The BRICS members, in particular, are faced with multiple difficulties and challenges.

The harder the times, the more valuable our confidence is. We must understand that progress can never be a straight line, and it is likely to go zig-zag and even suffer setbacks. The BRICS countries are blessed with plentiful natural and human resources, and enjoy such strengths as vast domestic markets, huge development potential and ample policy space. Even though there are difficulties along the way, the rise of the BRICS is irreversible.

The current international situation remains intricate and complex, with opportunities and challenges juxtaposed for the BRICS countries. We must enhance our cooperation, strengthen our unity, and continue to display leadership in promoting global growth. In Fortaleza last year, we made the decision to deepen BRICS partnership in the spirit of openness, inclusiveness and win-win cooperation. This year, our host Russia has also made BRICS partnership the theme of the summit. This shows that partnership as a notion has struck deep roots in our hearts.

Now, let me share with you some of my observations on how to strengthen that partnership.

First, we need to build a partnership for world peace. Despite the growing trend of our times for peace and development, the world is far from being tranquil. Local volatilities keep cropping up, and such non-traditional security threats as terrorism, narcotics, major epidemic diseases and natural disasters continue to emerge. The BRICS countries should champion a new approach of common, comprehensive, cooperative and sustainable security, take coordinated actions, come to each other's support, and work in concert to address such global challenges. We should guard against and combat all forms of terrorism, while cooperating in the sharing of experience and intelligence against terrorism, verification of criminal leads and law enforcement. China supports accelerating the building of the institutional framework for anti-narcotics cooperation, and is ready to join other member states in resolving the issue of narcotic drugs at both regional and global levels.

Forgetting history is tantamount to betrayal. This year marks the 70th anniversary of the end of the world war against fascism and the founding of the United Nations. The BRICS countries should join all the peace-loving countries and peoples in the world in firmly opposing any attempt or action to deny, distort or even tamper with the history of that war, and in upholding its victorious outcome and international equity and justice. At the same time, we must learn the lessons of history, do away with the Cold War mentality and reject the zero-sum game, and work together to maintain peace and stability in various regions and across the world.

Second, we need to build a partnership for common development.The continued success of BRICS cooperation hinges on laying a solid foundation, a community of shared interests among the BRICS countries. For the purpose of building a value chain of shared benefits and a big market of integrated interests, we should build an even closer economic partnership, leverage our complementary strengths in resource endowment and industrial structure and expand our development horizons through collective efforts. We should strive for simultaneous progress in building the New Development Bank headquarters and its African regional center, so that they will become operational sooner and produce early harvest. The BRICS economic partnership strategy needs to be implemented effectively with a view to identifying new areas of cooperation.

Third, we need to build a partnership for inter-civilization dialogue. The successful cooperation of the BRICS countries proves that different social systems can accommodate each other, that different development models can work with each other and that different values can draw on the strength of each other. We should stay open and inclusive so as to learn from each other and make progress together through seeking common ground while putting aside differences.

Located in four continents and two hemispheres, the BRICS countries have unique geographical advantages. We should make good use of such advantages by actively conducting dialogues and exchanges and sharing the achievements of cooperation with other countries and international organizations. We will build up our ranks and boost our representation and influence if we can enhance our solidarity and cooperation with other emerging markets and developing countries.

Fourth, we need to build a partnership for more effective global economic governance. International economic rules need constant updating in order to reflect changes in global growth pattern and ensure that a country's responsibilities are commensurate with its capabilities. We need to work together to enhance the stature and role of the BRICS countries in the global governance system, and help shape the international economic order in such a way that conforms to the historical trend of rising emerging markets and developing countries. We should promote reform to the governance structure of the IMF and increase the representation and voice of the emerging markets and developing countries. We should champion an open global economy, support the multilateral trading regime, take the Doha Round negotiations forward in a way that upholds the legitimate rights and interests of the emerging markets and developing countries, and ensure countries equal access to opportunities, rules and rights in international economic and trade activities.

The BRICS countries need to strengthen cooperation in information security and Internet management, jointly foster a peaceful, secure, open and cooperative cyberspace, and strive for equal rights to participate in Internet governance. We should also enhance our exchanges and cooperation on migration, an issue that is closely related to economic development and social stability of the BRICS countries.

As I said earlier, all our countries have before them new opportunities and challenges in their respective national development. With similar stages of development, the BRICS countries may share somewhat similar features in their opportunities and challenges. It is, therefore, necessary for us to compare notes in our respective governance, increase mutual understanding and mutual learning, and work together in search of solutions.

As for China, we are now making coordinated and comprehensive efforts to finish building a moderately prosperous society in all respects, deepen reform, advance the rule of law and strictly enforce party discipline. We have laid out strategic goals and strategic steps for China's governance under new conditions.

To finish building a moderately prosperous society in all respects is our strategic goal of the present stage. It is also a critical step toward realizing the Chinese dream of great national renewal. We will continue to take economic development as our central task and stay committed to building in China an economically, politically, culturally, socially and ecologically advanced society, delivering tangible benefit of reform and development to the people. We will firmly deepen reform, modernizing our governance system and governance capabilities and promoting sustained and sound economic and social progress. We will promote the rule of law, exercise governance and administration in accordance with law, build a law-based country, law-based government and law-based society, and ensure legislation in a scientific way, strict law enforcement, impartial justice, and observance of law by all. We will comprehensively advance the building of the Communist Party of China itself, enhance the Party's capability for self-improvement, self-innovation and self-development, maintain zero-tolerance for corruption, step up institutional building, and constantly strengthen its governing capacity.

What we do today bears on the well-being of the three billion people in the BRICS countries as well as on the destiny and future of the whole world and the entire mankind. As a Russian proverb goes, "The road to success is always bumpy and tortuous." So, let us embark on this journey together, work hand in hand to build a closer partnership among the BRICS countries and create an even better future for us all.