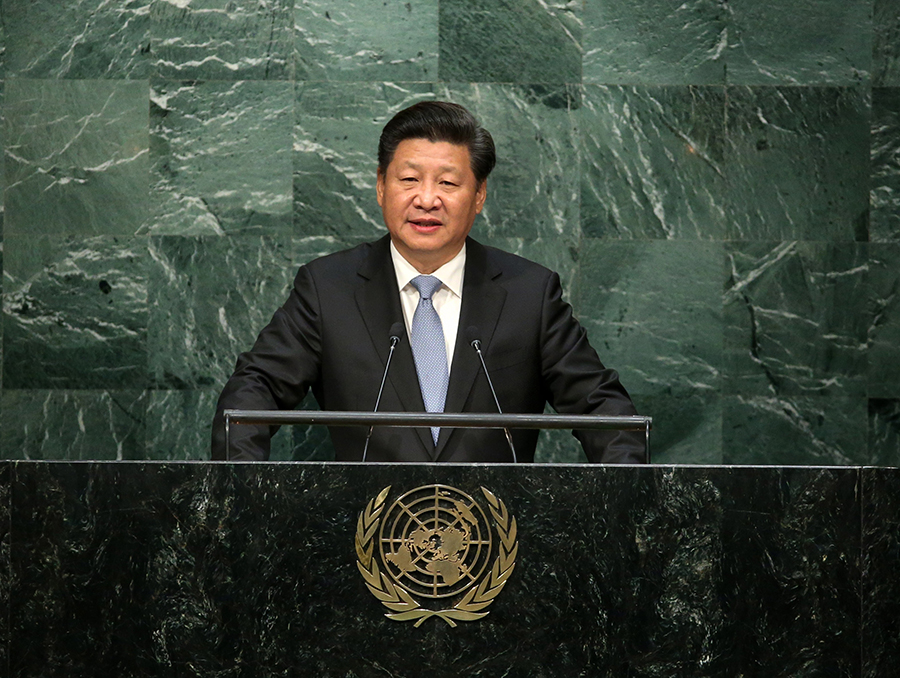 Xi Jinping, President of the People's Republic of China

Seventy years ago, an earlier generation fought heroically and secured victory in the World Anti-Fascist War, closing a dark page in the annals of human history. That victory was hard won.

Seventy years ago, that generation, with vision and foresight, established the United Nations. This universal and most representative and authoritative international organization has carried mankind's hope for a new future and ushered in a new era of cooperation. This was a pioneering initiative never before undertaken.

On the third of September, the people of China, together with the rest of humanity, solemnly commemorated the 70th anniversary of victory in the Chinese People's War of Resistance Against Japanese Aggression and the World Anti-Fascist War. As the main theater in the East, China made a national sacrifice of over 35 million casualties in its fight against the main forces of Japanese militarism. It not only saved itself and its people from subjugation, but also gave strong support to the forces combatting aggression in the European and Pacific theaters, thus making a historic contribution to ultimate victory.

History is a mirror. Only by drawing lessons from history can the world avoid repeating past calamity. We should view history with awe and through the prism of human conscience. The past cannot be changed, but the future can be shaped. To bear history in mind is not to perpetuate hatred. Rather, its purpose is to ensure that mankind does not forget its lessons. Remembering history does not mean being obsessed with the past. Rather, in doing so, we aim to create a better future and pass the torch of peace from generation to generation.

Over the past seven decades the United Nations has gone through the tests of time. It has witnessed efforts made by all countries to uphold peace, build their own countries, and pursue cooperation. Having reached a new historical starting point, the United Nations needs to address the central issue of how to better promote world peace and development in the 21st century.

The world is going through a historical process of accelerated evolution. The light of peace, development and progress will be powerful enough to dispel the clouds of war, poverty and backwardness. The movement toward a multi-polar world and the rise of emerging markets and developing countries has become an irresistible trend of history. Economic globalization and the advent of an information age have unleashed and boosted vast new social productive forces. They have created unprecedented development opportunities while giving rise to new threats and challenges which we must face squarely.

As an ancient Chinese adage goes, "The greatest ideal is to create a world truly shared by all." Peace, development, equality, justice, democracy and freedom are common values of all mankind and the lofty goals of the United Nations. Yet these goals are far from being achieved; therefore, we must continue our endeavors. In today's world, all countries are interdependent and share a common future. We should renew our commitment to the purposes and principles of the Charter of the United Nations, build a new model of international relations featuring mutually beneficial cooperation, and create a community of shared future for mankind. To achieve this goal, we need to direct our efforts as follows:

— We should build partnerships in which countries treat each other as equals, engage in mutual consultation and show mutual understanding. The principle of sovereign equality underpins the Charter of the United Nations. The future of the world must be shaped by all countries. All countries are equals. The large, the strong and the rich should not bully the small, the weak and the poor. The principle of sovereignty is not just limited to the idea that the sovereignty and territorial integrity of all countries is inviolable, and that their internal affairs are not to be subject to interference. It also means that all countries have a right to make their own choice of social systems and development paths, that this right should be upheld, and that all countries' endeavors to promote economic and social development and improve their people's lives should be respected.

We should be committed to multilateralism and reject unilateralism. We should adopt a new vision of seeking positive outcomes for all, and reject the outdated mindset that one side's gain means the other side's loss, or that the winner takes all. Consultation is an important form of democracy, and it should also become an important means of exercising international governance. We should resolve disputes and differences through dialogue and consultation. We should forge a global partnership at both international and regional levels, and embrace a new approach to state-to-state relations, one that features dialogue rather than confrontation, and seeks partnership rather than alliance. Major countries should follow the principles of no conflict, no confrontation, mutual respect and mutually beneficial cooperation in handling their relations. Major powers should treat small countries as equals, and take an ethical approach to justice and their own interests by putting justice before their own interests.

— We should create a security environment featuring fairness, justice, joint participation and shared benefits. In the age of economic globalization, the security of all countries is interlinked and every one impacts on every other. No country can maintain absolute security by its own efforts, and no country can achieve stability by destabilizing other countries. The law of the jungle leaves the weak at the mercy of the strong; it is not the way for countries to conduct their relations. Those who adopt the self-serving approach of using force will find that they are only lifting a rock to drop on their own feet.

We should abandon the Cold War mentality in all its manifestations, and foster a new vision of common, comprehensive, cooperative and sustainable security. We should give full play to the central role of the United Nations and its Security Council in ending conflict and keeping peace, and adopt the dual approach of seeking peaceful solutions to disputes and taking mandatory actions, so as to turn hostility into amity. We should advance international cooperation in both economic and social fields and take a holistic approach to addressing traditional and non-traditional security threats, so as to prevent conflicts from breaking out in the first place.

— We should promote open, innovative and inclusive development that benefits all. The 2008 international financial crisis has taught us that allowing capital to blindly pursue profit will result in chaos, and that global prosperity cannot be built on the shaky foundations of a market without moral constraints. The growing gap between rich and poor is both unfair and unsustainable. It is important for us to use both the invisible hand and the visible hand to form synergy between market forces and government functions, and strive to achieve both efficiency and fairness.

Development is meaningful only when it is inclusive and sustainable. To achieve such development requires openness, mutual assistance and cooperation. In the world today, close to 800 million people still live in extreme poverty, nearly 6 million children die before the age of five each year, and nearly 60 million children are unable to go to school. The just-concluded UN Sustainable Development Summit adopted the Post-2015 Development Agenda. We must translate our commitments into actions and work together to ensure that everyone is free from want, has access to development, and lives with dignity.

— We should increase inter-civilization exchanges to promote harmony, inclusiveness and respect for differences. The world is more colorful as a result of its cultural diversity. Diversity breeds exchanges, exchanges create integration, and integration makes progress possible.

In their interactions, civilizations must accept their differences. Only through mutual respect, mutual learning, and harmonious coexistence can the world maintain its diversity and thrive. Each social model represents the unique vision and contribution of its people, and no model is superior to others. Different civilizations should engage in dialogue and exchanges instead of trying to exclude or replace each other. The history of mankind is a process of active exchanges, interactions, and integration among different civilizations. We should respect all civilizations and treat each other as equals. We should draw inspiration from each other to boost the creative development of human civilization.

— We should build an ecosystem that puts Mother Nature and green development first. Mankind may utilize nature and even try to transform it. But we are ultimately a part of nature. We should care for nature and not place ourselves above it. We should reconcile industrial development with nature and pursue harmony between man and nature to achieve sustainable development throughout the world and the all-round development of humanity.

To build a sound ecology is vital for mankind's future. All members of the international community should work together to build a sound global eco-environment. We should respect nature, follow nature's ways, and protect nature. We should firmly pursue green, low-carbon, circular, and sustainable development. China will shoulder its share of responsibility and continue to play its part in this common endeavor. We also urge developed countries to fulfill their historical responsibilities, honor their emission reduction commitments, and help developing countries mitigate and adapt to climate change.

China will continue to participate in building world peace. We are committed to peaceful development. No matter how the international landscape may evolve and how strong we may become, China will never pursue hegemony or expansion, or seek to create spheres of influence.

China will continue to contribute to global development. We will continue to pursue common progress and the mutually beneficial strategy of opening up. We are ready to share our experience and opportunities with other countries and welcome them to join us on our voyage and sail together with us towards common development.

I wish to take this opportunity to announce China's decision to establish a 10-year, US$1 billion China-UN peace and development fund to support the United Nations' work, advance multilateral cooperation, and make a greater contribution to world peace and development. I wish to announce that China will join the new UN Peacekeeping Capability Readiness System, and has thus decided to take the lead in setting up a permanent peacekeeping police squad and building a peacekeeping standby force of 8,000 troops. I also wish to announce that China will provide a total of US$100 million of free military aid to the African Union in the next five years to support the establishment of the African Standby Force and the African Capacity for Immediate Response to Crisis.

As the United Nations enters a new decade, let us unite ever more closely to create a new mutually beneficial partnership and community of shared future for mankind. Let the vision of a world free of war and enjoying lasting peace take root in our hearts. Let the aspirations of development, prosperity, fairness and justice spread across the world!