Striving to build a hand-in-hand community of common destiny 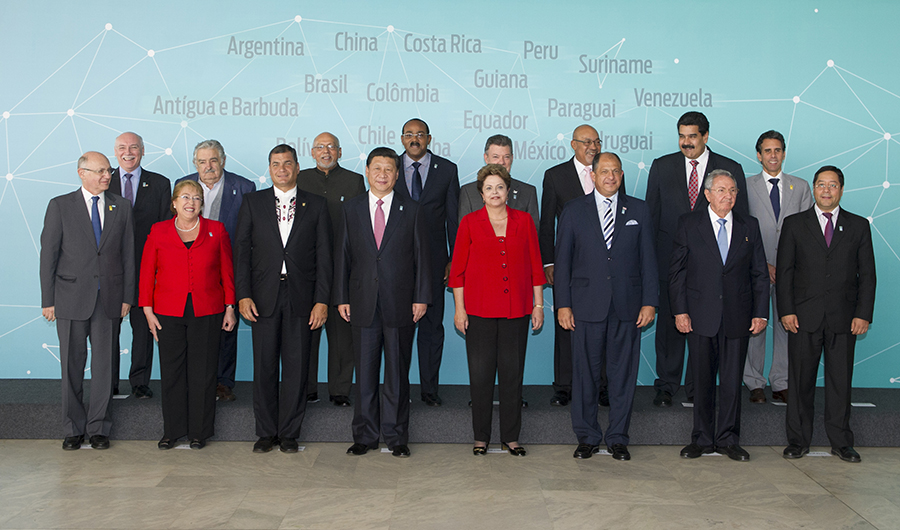 Before the Summit, Xi Jinping and Rousseff jointly welcomed the leaders and representatives of the Latin American and Caribbean countries attending the Summit, shook hands one by one and posed for group photos with them.

Xi Jinping and the leaders of other countries renewed friendship, sought common development and discussed cooperation in a sincere, friendly and practical atmosphere around the theme of "equality, mutual benefit, win-win cooperation and common development", agreeing to establish the China-Latin America comprehensive cooperative partnership of equality, mutual benefit and common development, and jointly announced the establishment of the Forum of China and Community of Latin American and Caribbean States (CELAC). Xi Jinping delivered a keynote speech entitled "Striving to Build a Hand-in-Hand Community of Common Destiny", announcing China's proposals and measures on promoting China-Latin America cooperation, proposing to build up a Five-in-One new pattern of China-Latin America relations: sincerely trust each other in politics, cooperate with each other for a win-win outcome in economy and trade, learn from each other in people-to-people and cultural exchanges, closely cooperate with each other in international affairs, and promote each other in overall cooperation and bilateral relations, so as to forge a hand-in-hand community of common destiny.

Xi Jinping pointed out that being in the best historical period and standing at a new historical starting point, China-Latin America relations have reasons to realize bigger development. I propose to jointly announce the establishment of the China-Latin America comprehensive cooperative partnership of equality, mutual benefit, and common development through this Summit.

First, adhere to equal treatment and always help each other sincerely. China and Latin American countries should firmly support each other in taking the development path that conforms to its own national conditions, strengthen the exchanges of the experience on governance and administration of state affairs, deepen strategic mutual trust and continuously understand and support each other on issues concerning each other's core interests and major concerns. China supports Latin American countries in promoting regional integrity and playing a greater role in regional and international affairs.

Third, adhere to communication and mutual learning and consolidate the ever-lasting friendship. China is willing to strengthen the contacts with Latin American countries in the aspects of governments, legislative bodies, political parties and regions, and to enhance exchanges and cooperation in such fields as education, culture, sports, press and tourism. Over the following 5 years, China will provide Latin American and Caribbean countries with 6,000 government scholarships, 6,000 training offers in China and 400 positions of in-house studying for Master's degree. China will also invite 1,000 party leaders from Latin American and Caribbean countries to visit China and launch the "Future Bridge" Training Program for One Thousand Chinese and Latin American Youth Leaders in 2015. China proposes to hold China-Latin America Cultural Exchange Year in 2016.

Fourth, adhere to international cooperation and safeguard common rights and interests. China is willing to work with Latin America to strengthen communication and cooperation with regard to various global issues and hotspot issues such as global governance, sustainable development, coping with climate change and network security, and enhance dialogues and cooperation on Asia-Pacific and Latin American affairs within the frameworks of international organizations and multilateral mechanisms such as the United Nations (UN), the World Trade Organization (WTO), the Asia-Pacific Economic Cooperation (APEC), the Group of 20 (G20) and the Group of 77 (G77).

Fifth, adhere to overall cooperation and boost the bilateral relations. Through this Summit, we will jointly announce the official establishment of the China-CELAC Forum and will hold the first ministerial conference of the Forum in Beijing at an early date. China is willing to make use of this platform with Latin America to carry out collective dialogues, improve the cooperation level and promote common development. China is willing to conduct dialogue and cooperation with Latin American and Caribbean regional and sub-regional organizations within the framework of the Forum.

Lastly, Xi Jinping pointed out that currently the Chinese people are striving to achieve the "Chinese Dream" of great rejuvenation of the Chinese nation, while the peoples of Latin American and Caribbean countries are also struggling for the "Latin American Dream" of realizing solidarity, cooperation, development and revitalization. The common dreams and shared pursuit closely connect China and Latin America. Let's seize the opportunity, forge ahead, and try hard to build a hand-in-hand community of common destiny, so as to create a splendid future for China-Latin America relations.

President Dilma Rousseff of Brazil chaired the Summit. She finally noted that the success of this Summit is of vital historic significance. She extended her thanks to President Xi Jinping for putting forward a series of important proposals and measures. Latin American and Caribbean countries will make joint efforts with China to well implement these proposals and effectively build the CELAC-China Forum to achieve common development and prosperity.

President Enrique Peña Nieto of Mexico was unable to attend the Summit due to the schedule conflict. He sent a special letter to President Xi Jinping and a special envoy to the Summit. In his letter, he wishes the Summit a success, firmly supports the establishment of the CELAC-China Forum, and believes that the Forum will become a key platform for promoting Latin America-China dialogues and cooperation.

After the Summit, China and Latin America issued together the "Joint Statement on China-Latin America and the Caribbean Summit in Brasilia".