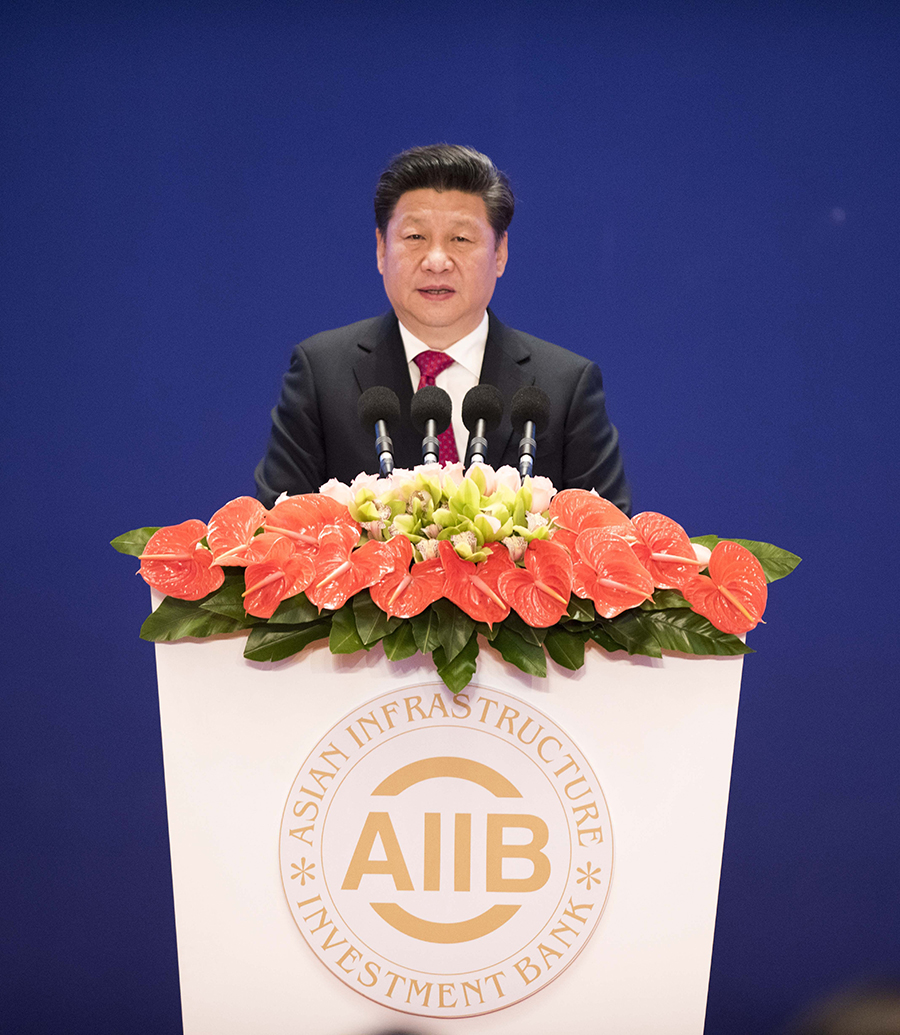 The following is the translated version of the full text of his address:

Now is a moment that will be recorded in history. Today, representatives from 57 countries are gathered in Beijing for the opening of the Asian Infrastructure Investment Bank -- the AIIB, and the inaugural ceremony of the AIIB Board of Governors and Board of Directors. On behalf of the Chinese government and people and also in my own name, let me extend warm welcome to all guests present. I want to congratulate the AIIB on its opening and give my heartfelt thanks to all parties for their support and dedication to the founding of the AIIB.

The initiative to set up the AIIB was put forward by China in October 2013. For over two years since then, we have together traveled an extraordinary journey that has taken us to the inauguration of the AIIB today.

We owe the above-mentioned progress and achievements to the strong dedication and collaboration of all AIIB members, who have impressed us with their open mind for inclusiveness, their determination to seek practical results through common development, as well as their crave for professional excellence as seen in the high standard and efficient operation of the AIIB. Member states demonstrated a strong cooperative spirit throughout the negotiation, policy-making and senior management selection processes. This has made it possible for us to reach early agreement on key issues regarding the AIIB. Member states were quick in completing the domestic signing and ratification process, thus allowing the Agreement to enter into force as scheduled. This gives full expression to member states' commitment and support for the AIIB to come into being. In the course leading up to the founding of the AIIB, member states acted in strict compliance with multilateral procedures, making sure that the AIIB becomes a truly international, rule-based and high-standard institution in all aspects involving its governance structure, operation policy, safeguards and procurement policy and human resources management.

The founding of the AIIB proves once again that whenever there is a will, there will be a way. We are confident that when faced with the task of advancing world peace and development, so long as the international community has the will for consensus building and for win-win progress, we will be able to not only draw the big plan, but also turn it into reality.

The founding and opening of the AIIB will effectively boost investment to support infrastructure development in Asia. It will serve to channel more resources, particularly private investment, into infrastructure projects to promote regional connectivity and economic integration. It will bring along a better investment environment and more job opportunities and trigger greater medium- to long-term development potential on the part of developing members in Asia. This, in turn, will give impetus to economic growth in Asia and the wider world.

It is our hope that member states will continue to work with one heart and one mind, actively pitch in and get the operation of the AIIB running as soon as possible, so that the AIIB could grow fast and strong and add to the strength of multilateral development banks, thus contributing even more to global development.

The AIIB shall remain committed to open regionalism. The institution and existing multilateral development banks may complement each other for mutual strength. With its inherent advantages and unique features, the AIIB could make the current multilateral system more dynamic to facilitate common development of multilateral institutions. The AIIB could become a professional and efficient platform to promote infrastructure related investment and financing for the benefit of all sides. And the AIIB has a due role to play to raise the level of infrastructure financing and of economic and social development in the region.

The AIIB should adapt itself to new trends in international development and accommodate the diverse needs of developing members. It should explore new business models and financing tools, and help member states develop more infrastructure projects that are of higher quality and at lower costs. While developing countries make the mainstay of the AIIB membership, the institution also attracts a large number of developed members. Such a unique strength makes it a bridge and a bond to facilitate both South-South cooperation and North-South cooperation.

The AIIB should function as a multilateral development bank as far as its operating model and principles are concerned. It should learn from the experience and best practices of existing multilateral development banks in terms of governance structure, environment and social benefits policies, procurement policy and debt sustainability. Mutual learning and sharing helps the AIIB function according to high standards.

China, as the initiator of the AIIB, will firmly support its operation and development. In addition to subscribing capital according to plan, China will contribute 50 million U.S. dollars to the project preparation special fund to be established soon, to support the preparation for infrastructure development projects in less developed member states.

The year 2016 is the first year of China's 13th five-year plan. China will aspire to achieve innovative, coordinated, green, open and shared development. The focus of agenda will be on promoting innovation-driven development to strengthen new drivers for economic development, on promoting supply-side structural reform to adapt to and lead the new normal of economic development, and on opening wider to the outside world with more emphasis given to advancing high-level and two-way opening up. China has the confidence and capability to ensure sustained and sound economic development and bring more opportunities and benefits to Asia and beyond.

China will continue to contribute to global development and will continue to pursue an opening up strategy of mutual benefit. The door of China's opening up will never shut and China welcomes all countries to ride on its development. China stands ready to work with other parties to make sure that the AIIB will start to operate and play its due role as soon as possible and contribute to economic growth and better livelihood in developing countries. And China continues to welcome AIIB and other international financial institutions to take part in the building of the Silk Road Economic Belt and 21st Century Maritime Silk Road.

As the saying goes, the bonfire burns higher when everyone adds firewood to it. The AIIB belongs to all its member states. It is designed to facilitate common development in the region and the world at large. To succeed, it needs to count on the solidarity, cooperation and synergy of all sides.

I hope and believe that through the joint efforts of all member states, the AIIB will become a new multilateral development bank for the 21st century that is professional, efficient and clean in operation. It will also be a new platform to help foster a community of shared future for mankind, to make new contribution to prosperity in Asia and beyond and lend new strength to improvement of global economic governance!