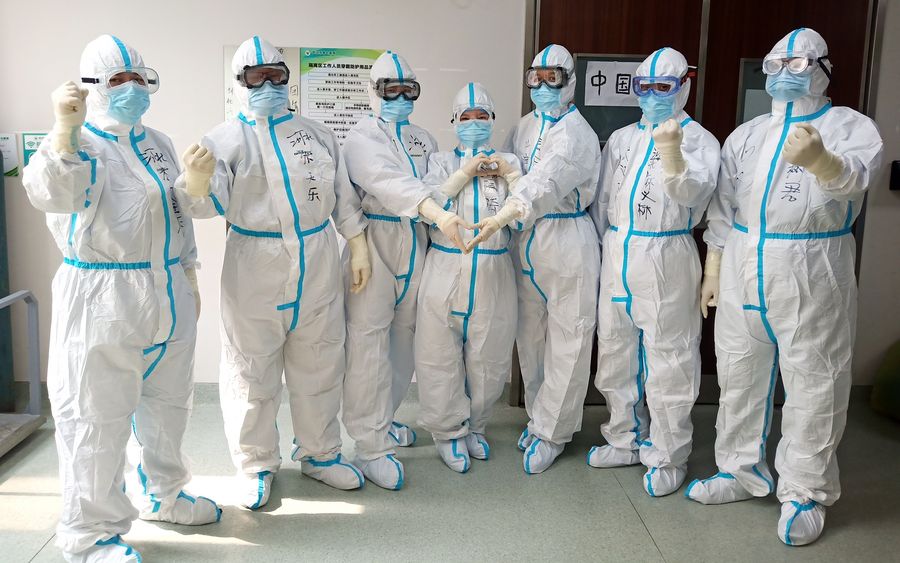 BEIJING, Feb. 26 (Xinhua) -- China on Wednesday expressed strong dissatisfaction and firm opposition to U.S. Secretary of State Mike Pompeo's groundless accusation against the country's novel coronavirus (COVID-19) prevention and control work, and urged the U.S. side to give up ideological bias, and stop undermining China-U.S. mutual trust and cooperation.

Foreign Ministry spokesperson Zhao Lijian made the remarks at a press briefing in response to a question concerning Pompeo's accusation that expelling Wall Street Journal (WSJ) journalists exposes the issue in China's COVID-19 response, alleging that if China permitted its own and foreign journalists to speak freely, China and other nations would have been far better prepared to address the challenge.

"When the Chinese people are going all-out to fight the epidemic, Mr. Pompeo once again launched groundless accusation against China. This is so abhorrent and we are firmly opposed to it," Zhao said.

Stitched aerial photo taken on Feb. 8, 2020 shows a view of the nursing unit B of "Wuhan Livingroom" in Wuhan, central China's Hubei Province. The cultural building complex dubbed "Wuhan Livingroom" is converted into a hospital to receive patients infected with the novel coronavirus. [Photo by Li He/Xinhua]

Noting Pompeo's remarks did not even get the facts straight, Zhao said the Chinese government has been open, transparent and highly responsible in its epidemic prevention and control efforts.

As for the WSJ article with its insulting headline, it is never a question of freedom of speech and press. All people, as long as they have conscience and bottom line, should reject and resist such racist and wrongful words and actions, said the spokesperson.

"Even WSJ has admitted its mistake and been learning some lessons, how come Mr. Pompeo, in total disregard of the public opinion of the international community, made yet another attempt to back up WSJ by badmouthing China? One has to wonder if WSJ is an agent of the U.S. State Department," he added.

"Since Mr. Pompeo talks about freedom of speech so much, would he care to explain why he cursed at an NPR journalist? Why was the journalist denied press credentials to travel with him? Is that Mr. Pompeo's definition of 'freedom of speech'? I think it's typical discourse monopoly and double standards," said Zhao.

"We urge Mr. Pompeo to give up his ideological bias against China, discard the Cold-War mentality and zero-sum game mindset, act in ways that suit his status, stop undermining China-U.S. mutual trust and cooperation, and make no more attempts at sowing discord among the Party, the Chinese government and the Chinese people," the spokesperson added.